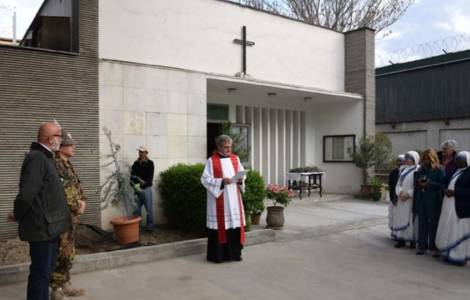 Kabul (Agenzia Fides) - "The priority is to reduce violence against civilians, and then to end the war with political dialogue". Barnabite priest Giovanni Scalese, at the head of the Missio sui iuris in Kabul, hopes that the Afghan war can be resolved through negotiations. "The ceasefire is what he asks and what the civil population needs", says Father Scalese, "we pray that it will happen as soon as possible".
Yesterday's unexpected visit by US President Donald Trump to US troops in Bagram's Afghan base could help them resume dialogue. "Talks with the Taliban are about to start again", Trump said in front of the soldiers. "We will reduce the troops, the Taliban seem ready for the ceasefire". This is the request made to the Taliban a few weeks ago by President Ashraf Ghani's national security adviser, Amdullah Mohib, as a condition for negotiation. "Talking to those who are different from us, with those who have opposite positions, is the most difficult thing, but necessary to resolve conflicts", notes Father Scalese. So far the Taliban have rejected any hypothesis of direct talks with the government of Kabul, which they consider illegitimate, preferring to negotiate with Zalmay Khalilzad, Trump's envoy for Afghanistan. For almost a year Khalilzad met the delegation of "Koranic students" in Doha, Qatar, coming very close to signing an agreement. The agreement provided for the gradual withdrawal of foreign troops, the guarantee of the Taliban that would have dissolved all ties with the global jihadist groups, and finally a ceasefire and the willingness to sit down at the negotiating table with the government of Kabul. In the course of the confrontation, however, the last two points were declassified as "secondary", and President Ghani complained about the exclusion from the negotiations, which was suddenly interrupted by Trump on 7 September.
The US President's visit to Afghanistan takes place a few days after an important exchange of prisoners: on November 19, three authoritative members of the Taliban were released in exchange for the release of two professors (one US, one Australian) seized by the Haqqani network in Kabul in August 2016. But it also comes in the midst of a serious post-election political crisis: two months after the presidential elections on September 28th, the favorite candidates, Ashraf Ghani himself and Prime Minister Abdullah Abdullah, accuse each other of fraud. Thousands of Abdullah’s supporters today demonstrated in Kabul, criticizing the new counting initiated by the Electoral Commission and asking to exclude, for alleged irregularities, about 300,000 of the two million registered votes. Ghani, on the other hand, is politically capitalizing on the bilateral meeting held yesterday with Trump. Both Trump and Ghani address the Taliban: "If you are honest in wanting peace, accept the ceasefire". (GB) (Agenzia Fides, 29/11/2019)

ASIA/INDIA - The new law on citizenship to immigrants "is unconstitutional": appeal to "civil disobedience"

ASIA/AFGHANISTAN - Fr. Scalese: "Peace in the future of Afghanistan, without turning back"

ASIA/AFGHANISTAN - Fr. Moretti: "The democratically elected government cannot be cut out from an agreement"

AFRICA/EGYPT - Al Sisi at the vigil of Coptic Christmas: "If we love God, we must love each other"

AFRICA/NIGERIA - Explosion on the border with Cameroon causes 30 deaths

ASIA/PHILIPPINES - Terrorist violence on Christmas eve: attack in front of the Cathedral