AFRICA/CAMEROON - Tension and violence in the northern provinces: the Church calls for inclusive dialogue 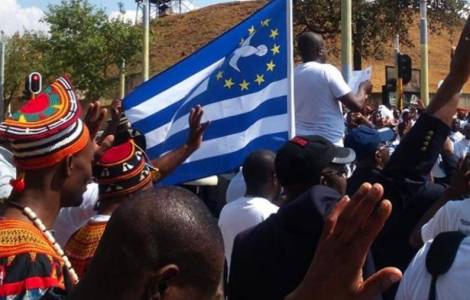 2020-11-06
Cardinal Tumi kidnapped, engaged in the peaceful resolution of the conflict in the English-speaking regions

Bamenda (Agenzia Fides) - In the Anglophone provinces of Cameroon violence continues. Although in some areas clashes have stopped, in other places the tension is very high. The law enforcement agencies in Yaoundé have put in place a system of repression that is hitting the population hard. The separatist militias respond with equal hardness. There is a lot of fear. "In recent days in Bambui (a town not far from Bamenda, the main city in the northwestern province) many houses were burned and armed clashes continue every day. Some people were killed. Police patrols scare the population, especially the elderly who have never experienced such an atmosphere of tension", says a Cameroonian religious to Fides, asking for anonymity to avoid retaliation against him and against other religious.
In the two provinces, the conflict has been ongoing since 2016. Therefore President Paul Biya proclaimed that he wanted to move French-speaking teachers to English-speaking schools. This provision was the spark that led to a very hard clash between authorities and the militias calling for the independence of the English-speaking provinces. So far the conflict, according to a report by the NGO Human Rights Watch, has caused 1,800 deaths, over half a million displaced people and 35,000 refugees in Nigeria.
The population not only fears the police, but also the separatist militias. "In recent months many priests have been kidnapped. This has forced Andrew Nkea Fuanya, the bishop of Mamfe, to close three parishes in his diocese. George Nkuo, bishop of Kumbo, was kidnapped. Not only the religious authorities, but also the civilians are kidnapped every day to then be freed on ransom. Having said that, it should be added that a large part of the population prefers the militiamen to the police".
Tension blocks the social and economic life of the provinces. "The continuing clashes - continues Fides source - make the activities of civil society impossible. Also in the economic field the difficulties are increasing since the majority of the enterprises have ceased to operate on the spot. The two provinces live on agriculture, but also cultivating the fields is complicated, many peasants were killed while they were working".
Will the presidential and legislative elections of 2020 change the situation? There is skepticism: "Some political parties, such as the Social Democratic Front, the main opposition formation, have withdrawn", the religious continues. "We fear fraud during the vote, we also fear an explosion of violence. The Catholic Church continues to preach that violence cannot lead to positive solutions. The Bishops call for inclusive dialogue where parties can confront each other without prejudices. Faced with constant threats, especially by separatists, the Catholic Church tries to bring young people closer to educate them about the values of life". (EC) (Agenzia Fides, 25/11/2019)