ASIA/INDIA - Violence against Christians: the growing trend is confirmed 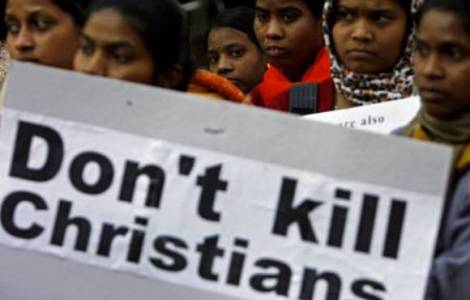 New Delhi (Agenzia Fides) - 275 episodes of violence against Indian Christians reported (from January 1st to October 31st 2019) on the toll-free number activated by the "United Christian Forum (UCF) and by the "Alliance for Defending Freedom"( ADF), organizations committed to defending the life and rights of Christian communities in India. As announced to Agenzia Fides, of the 275 episodes of violence reported on the toll-free number, 192 were intimidation and threats by a crowd of militants. We are talking about 27 accidents per month, compared to the average of 20 accidents in 2018. According to data from Fides, 145 women and 106 children were injured in cases of mass violence.
Among the most recent episodes, recorded in October 2019, on October 24, 2019, in a village in the state of Orissa, a group of militants broke into the homes of nine Christian families, burning Bibles and other Christian literature in front of the statue of a Hindu god.
In Gujarat, a crowd of 35-40 people interrupted a peaceful prayer meeting in Fatehpur Tehsil on 22 October, with false accusations of religious conversion, seriously attacking and wounding the Protestant Christian pastor who led the liturgy. On 20 October, a group of 4-5 extremists threatened and asked to close a Christian church in Coimbatore, in Tamil Nadu.
On October 18, 2019, a crowd of members of the "Bajrang Dal" (forum of Hindu extremist groups) interrupted a liturgy and profaned the Holy Communion, Bibles and other religious objects in Nehru Nagar in Madhya Pradesh
In a complaint filed on October 13, 2019 to the ADF, it is reported that Christian families residing in Raghunathpur, in the state of Jharkhand, are socially ostracized and deprived of basic village services.
In these and other episodes, "the tendency not to file a complaint (First Information report) against perpetrators of violence continues, of these 275 incidents, only 32 complaints have been registered against the perpetrators", notes UCF. "This demonstrates the tacit understanding between the perpetrators of violence and the police, which obviously enjoys the patronage of local political leaders or officials. Sometimes the failure to file complaints is also due to the fear of reprisals", says Catholic activist Michael Fides to Fides, former member of the Delhi State Minorities Commission.
According to data recorded by the "United Christian Forum (UCF) and "Alliance for Defending Freedom" (ADF) since 2014, attacks on Christians have steadily increased: they were 147 in 2014, 177 in 2015, 208 in 2016, 240 in 2017; 292 in 2018.
Tehmina Arora, director of ADF India, told Fides: "No one should be persecuted because of his faith. It is worrying to see these acts of illegal mass violence continue even after a series of indications to the government by the Supreme Court. Political forces must stop encouraging violence and the police must act to guarantee protection for religious minorities". (SD) (Agenzia Fides, 25/11/2019)