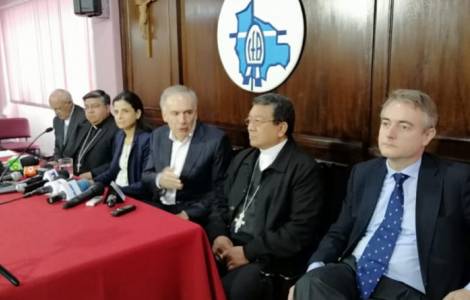 La Paz (Agenzia Fides) – On Saturday 23 November, representatives of the Bolivian Episcopal Conference, of the United Nations Organization and of the European Union, presented the points of the agreement reached at the end of the dialogue that took place in recent weeks (see Fides, 19; 22/11/2019). The document, sent to Fides, wants to contribute through dialogue to the peace building process focusing on some crucial issues.
First of all, the commitment to work through dialogue is reaffirmed, supporting "efforts to prevent and overcome conflicts through dialogue, particularly in the areas of the country most affected by violence". It also intends to provide technical assistance to the Supreme Electoral Court and Departmental Electoral Courts, so that "the electoral process meets the highest national and international standards".
Another point of the agreement provides for "establishing a presence in the departments to promote the full exercise of the political rights of citizens, on an equal basis and without intimidation, during the electoral campaign, the elections and the post-election period" and to "lend particular attention to the full, free and safe participation of women and indigenous peoples in the electoral process". After the tragic events that took place during the October 20 elections (see Fides, 22/10/2019), it is necessary to reach truth and justice, guaranteeing "transparent, impartial and effective investigations and that those responsible are punished according to the laws and international human rights".
To give greater certainty to the dialogue process, it is necessary to "monitor the implementation of the agreements reached at the dialogue table". It was also decided to increase the activities of the United Nations organization in Bolivia, in particular towards the most vulnerable population. The last point of the agreement concerns the international community, called to ensure its support "for a peaceful resolution of the crisis and the conduct of a transparent, credible and inclusive electoral process".
On Sunday 24 November, Bolivia's interim President, Jeanine Añez, signed the "Exceptional and transitional regime law", approved by Parliament, which foresees general elections in 2020. The elections will be held within a maximum period of 120 days, once the electoral calendar has been approved. According to the agreements between the political forces in power and the opposition, the new law provides that Evo Morales and his deputy Alvaro García Linera will not be able to participate in the 2020 elections; new members of the Supreme Electoral Court will be elected for 6 years; political parties will present new alliances and candidates. (S.L.) (Agenzia Fides, 25/11/2019)