ASIA/THAILAND - A missionary: "The Pope invites the Thai faithful to move from the Gospel to life and from life to the Gospel" 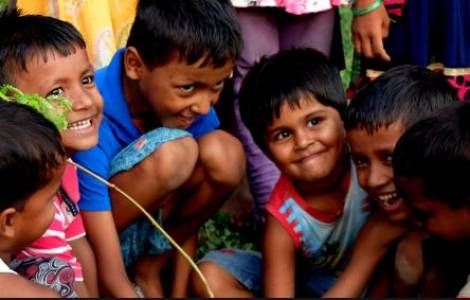 2019-11-22
A missionary: "The Pope invites the Thai faithful to move from the Gospel to life and from life to the Gospel"

Bangkok (Agenzia Fides) - "Thai Catholics have a profound religious sense, they live faith very intensely and sometimes travel more than 50 kilometers to attend mass. Sometimes, however, here in Indochina, sacredness can become rituality, also due to the influences of the Chinese and Indian worlds. The Pope's visit today is an appeal and an encouragement to the faithful to embody the Word of God in life, not reducing faith only to worship: being ‘missionary disciples’ means passing from the Gospel to life and from life to the Gospel.
This is what Fr. Claudio Bertuccio, 54, Italian missionary of the Oblates of Mary Immaculate, for 26 years on a mission in Thailand, says to Agenzia Fides, on the occasion of Pope Francis' trip to Thailand, where today he is Superior of the Oblate delegation for Thailand and Laos.
Father Bertuccio expressed himself on the missionary work carried out by the Oblates in Thailand, in parishes, but also next to indigenous peoples such as the hmong: "Let us help build the ecclesial community, promoting the sense of belonging of different groups to the Church, in a society characterized by an individualistic culture, also linked to Buddhist spirituality that emphasizes the inner dimension of the person.
Our presence consists in living with people, meeting families, creating human relationships". The mission in that land where Catholics are a small minority, in a 95% Buddhist context, explains Father Bertuccio consists "in giving evangelical witness with the apostolate of charity, offering attention to needy and vulnerable people, allowing each person, especially if poor and suffering, feel the love of Christ. In this way, one witnesses one's faith with the Christian announcement, which passes through the works of mercy".
Father Bertuccio recalls that "going on a mission means responding to the vocation of going forth, of announcing the Gospel ad gentes. But also to that of 'being', to really enter the culture and mentality of a people, learning its language, sharing joys and sorrows, building authentic human relationships and living the evangelical works of mercy with simplicity. With the awareness of being useless servants".
The Pope's visit to Thailand, on the occasion of the celebrations for the 350th anniversary of the establishment of the Vicariate of Siam, "reminds the nation that the Catholic Church has been present for over three centuries and represents a boost to the missionary commitment of all the baptized. The Thai faithful - he explains - do not feel very involved in the mission of the Church and often limit themselves to attending the liturgies. In this framework, the apostolic journey of the Pope has a strong missionary imprint when he talks about evangilization".
With over a thousand Catholic schools of every order and degree, and 500,000 students, the vast majority of whom are non-Christian, "the Church's commitment to education was born precisely for the purpose of evangelization. This is another of the aspects to be rediscovered today for the Thai Catholic community", he concludes. (PA) (Agenzia Fides, 22/11/2019)

ASIA/JORDAN - King Abdallah II donates a minibus to the home for orphans in Anjara, promoted by the religious family of the Incarnate Word

AFRICA/ERITREA - Father Zerai: "The international community must not be silent in the face of the tragedy of the Eritrean people"