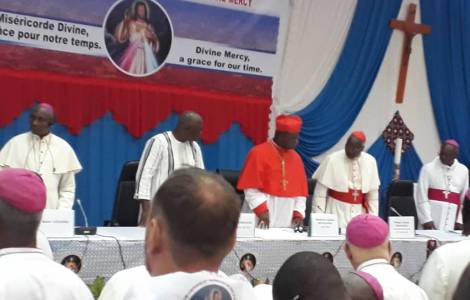 2021-01-22
The body of the missing priest has been found; victim of bandits or terrorists?

2021-01-21
Catholic priest missing: Bishop asks for prayer for his release

2020-11-09
Bishops on upcoming elections: "Differences of opinion must be understood as enrichment"

Ouagadougou (Agenzia Fides) - "In the Sahel the fundamental human rights are violated every day: the right to life, to religious freedom, to education, to property, to security" denounce the Bishops of Burkina Faso, Niger, Ghana, Mali and Ivory Coast, in a statement released at the end of a meeting held in Ouagadougou, on the crisis that is devastating the region due to the violence of armed jihadist groups that hit vast areas of Mali, Niger, Burkina Faso. This last country in particular has recorded more than 700 deaths and 500,000 internally displaced persons and refugees caused by incursions by armed groups since 2015.
"The epicenter of insecurity was first in Mali. Now it is Burkina Faso that is at the heart of the conflict", said Patrick Youssef, Deputy Director of the International Committee of the Red Cross for Africa, during the press conference at the International Forum in Dakar (Senegal) on peace and security in Africa, where the Sahel crisis was at the center of the works.
Even Countries touched so far marginally by jihadist terrorism have expressed concern about the situation in which neighboring states live. "One must never think that terrorist threat affects others. All the countries in the world are currently affected by this threat, also the Ivory Coast", said Foreign Minister of the Ivory Coast, a Country that suffered a terrorist attack in Grand Bassam in March 2016, at the Dakar forum.
The serious insecurity in which vast areas of Burkina Faso live did not prevent the opening on November 18 in Ouagadougou of the 4th Congress of Africa and Madagascar on Divine Mercy. The Congress, presided over by His Eminence Cardinal Philippe Nakellentuba Ouédraogo, Archbishop of Ouagadougou, which will end on November 24, is entitled "Divine Mercy: a grace for our time".
Among the themes of the reports that are presented at the Congress, several deal with issues that have a connection with the crisis of the area, from the manipulation of conflicts to the illegal and brutal exploitation of natural resources, from the distortions of international trade to the deepening of the gap between the rich and the poor. (L.M.) (Agenzia Fides, 20/11/2019)