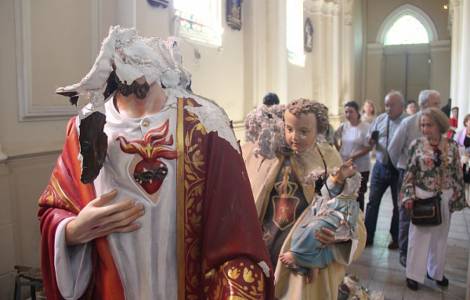 2021-01-15
"Christ Migrant of the World": a year of help and support for migrants in the Archdiocese of La Serena

2021-01-11
New violence in Araucania: appeal of the Bishop of Temuco, "only fraternity generates social peace"

2020-12-29
The legalization of euthanasia is "a crime against human life", the dignity of the person and his fundamental rights

2020-12-23
The traditional Christmas feast for children celebrated in Rancagua, in compliance with health measures

2020-12-18
"A gesture of solidarity, at the foot of the Manger": in times of pandemic it is necessary to redouble efforts

Valdivia (Agenzia Fides) - Sorrow for the profanation and damage caused to the church of San Francisco, heritage of southern Chile and Valdivia, were expressed by Mgr. Nelson R. Huaiquimil, Vicar General of the Chilean diocese of Valdivia. In a statement he writes: "We are deeply saddened by the destruction that the Temple of San Francisco de Valdivia has suffered, we know that the most important thing in every situation is always the people, and five Dehonian brothers, consecrated persons at the service of the community live there. They are fine, but they are experiencing a natural state of helplessness and pain. It pains us that they entered the Temple and the Blessed Sacrament was desecrated, the sacred images, the furnishings destroyed and general damage to this heritage, which belongs to all the Valdivians" was carried out.
The political and social crisis that Chile is going through is accompanied by violent and uncontrolled demonstrations that also target places of worship (see Fides, 21/26/28/10/2019). The Bishops expressed their sorrow "for the attack on the churches and places of prayer without respect for God and for those who believe in him", recalling that "the churches and other places of worship are sacred" (see Fides, 11/11/2019).
The Vicar general of Valdivia shares the legitimate search for justice and peace undertaken by so many Chileans throughout the country. Finally he invites everyone "to join in prayer and in the search for good, to pray for all those who have suffered violence and who cause different forms of violence", urging them to look at each other "not as enemies, but as those who are able to build together the human family that we all expect".
On the night of Monday 12 November, a group of violent people broke into the "María Auxiliadora" Shrine in Talca, destroying the sacred images, damaging the benches and profaning the tabernacle. On Tuesday, November 12, the Apostolic Administrator of the diocese, Mgr. Galo Fernández, presided over the Mass of restoration, concelebrated by Salesian priests and other priests of the diocese.
Father Pedro Pablo Cuello, director of the Salesians in Talca, informed before the mass that the damages have not yet been quantified, and added: "The message I want to give to all the inhabitants of Talca, to young people, to adults and to children it is that we must work for peace, it is everyone's work, we must all work for it".
In the homily the Bishop said that "it is not the material loss of a number of benches, nor the destruction in itself of the plaster images that represent the Lord, Saints, that have hurt us. We are wounded by being witnesses of the violence we suffer in our homeland, from the disagreement among Chileans". He then urged: "Anger, violence, do not build, destroy. It does not only destroy material goods, but the most precious thing, it destroys the coexistence among brothers". (S.L.) (Agenzia Fides, 14/11/2019)