ASIA/SYRIA - Armenian priest and his father killed in Deir ez Zor. Archbishop Marayati: "for us they are martyrs. And the war is not over" 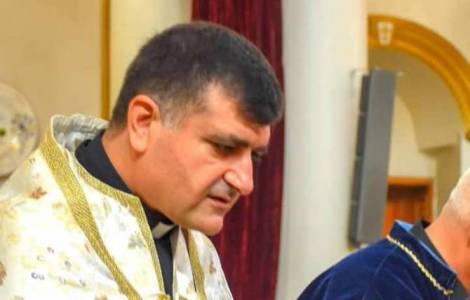 Qamishli (Agenzia Fides) - The funeral of the Armenian Catholic priest Hovsep Hanna Petoyan and his father Hanna Petoyan took place this morning in Qamishli, killed on Monday 11 Novembe. The two were attacked by unidentified gunmen as they traveled southbound from Hasaka province to Deir ez-Zor, in the north-east of Syria. "For us they are martyrs. And what happened to them is a confirmation that the war is not over here, as we had hoped", says to Agenzia Fides Boutros Marayati, Armenian Catholic Archbishop of Aleppo.
The funerals of the priest and his father were celebrated in the Armenian Catholic Church of St. Joseph, in the presence of priests, religious, and faithful of all the Christian communities present in the area. Father Antranig Ayvazian, Episcopal Vicar of the Armenian Catholic community of Upper Mesopotamia and northern Syria presided over the funeral liturgy.
Father Hovsep, 46, was married and a father of three children, ordained a priest 5 years ago, was the priest of the Armenian Catholic community of Qamishli, in the northeastern Syrian province of Hassake. "In the city of Qamishli" says Archbishop Marayati to Fides, "many Christian refugees also fled from Deir ez-Zor, when that city was devastated by war. He also carried out his pastoral work among them, and for a long time he also followed the projects implemented with the help of international groups to rebuild the church and the houses of the Christians in Deir ez Zor, destroyed by the war. For this reason he went to Deir ez Zor every two weeks to check the progress of the work. He had already carried out six trips to that city so dear to the memory of the Armenians, where there is the shrine of the martyrs of the genocide, also devastated during the conflict".
At the time of the ambush, the priest and his father were travelling together with an Armenian deacon - wounded during the assault - and another person. The two killers had their faces covered and fled after the ambush. The priest's father died immediately. Father Hovsep, wounded in the chest, was brought to a clinic in Deir ez Zor and then transferred by ambulance to a hospital in Hassakè, where he arrived already lifeless.
The city of Deir ez Zor is controlled by the Syrian army, but in the area there are also Kurdish forces and US military still operating. In the sub-district of al-Busayrah, an area where the ambush occurred, armed groups affiliated to the self-styled Islamic State (Daesh) are also concentrated, who yesterday claimed responsibility for the gunning down of the Armenian Catholic Priest and his father (but stating, erroneously, to have eliminated "two priests"). "The car in which the priest was traveling there was the inscription of the Armenian Church".
Syrian state TV SANA called the killing of the Armenian Catholic priest and his father "martyrdom", while the Kurdish media presented the resurgence of bloody attacks attributable to Daesh as an indirect consequence of the Turkish military intervention in Syria, which forced Kurdish militias operating in the area to review their strategies and suspend military operations against jihadist cells still present in the north-east of Syria.
According to the Kurds of the Rojava Information Center, Daesh jihadists allegedly carried out 30 attacks in the first ten days of November, with a 300 percent increase from their activity levels compared to the period prior to the Turkish military initiative in Syrian territory. (GV) (Agenzia Fides, 12/11/2019)

AFRICA/NIGERIA - Another priest kidnapped; alarm after the attack on a prison near Abuja