AFRICA/KENYA - The Bishops: "Join the campaign against corruption" 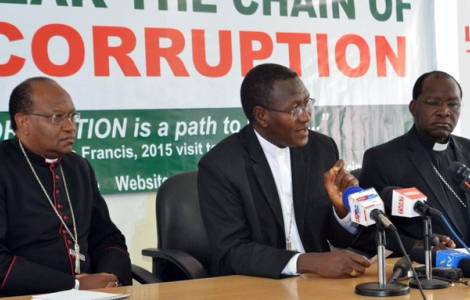 2020-09-26
Being a missionary in Kibera, one of the poorest suburbs in the world; the story of the National Director of the PMS to Fides

Nairobi (Agenzia Fides) - "We are joining forces to fight corruption in the Country". Thus the Bishops of Kenya ask all Kenyans to support the campaign entitled "Let us Break the Chains of Corruption" launched by them on November 5 (see Fides, 6/11/2019).
"We are committed to sustaining this campaign initially for the next six months and going forward", the Bishops said in a statement published at the end of their November Plenary Assembly. "We continue to count on your support because this monster of corruption cannot be faced with only one actor. We must join our hands in fighting and weeding out this vice within our society. Our new appeal is to all Churches, other Faiths and people of goodwill to truly join the war on corruption so as to bring more honesty and integrity in our society".
The declaration defines a very broad spectrum of corruption that goes beyond that practiced by dishonest politicians and officials. "All that promotes the culture of death is corruption", say the Bishops, for example: "The destruction of our environment is corruption;
Killing unborn children, infidelity in marriage and domestic violence is corruption of the family;
Selling drugs to the youth, enticing them to promiscuity and abusing them is the worst form of corruption;
Soliciting for favours and privileges to the disadvantage of others by either bribing or using tribe, religion, clan, political affiliation, office or intimidation is corruption.
The attempt to cheat during exams, even after many concerted efforts by the Government to stop the vice, is a terrible form of corruption that will destroy the credibility that we have as a Country".
Among the other topics addressed by the Plenary is the UN Conference on Population held in Nairobi, entitled "Nairobi Summit on International Conference on Population and Development (ICPD).
"This summit, under the guise of advancement and development of women, is advocating the so called “Sexual and reproductive health and rights” and “comprehensive sexuality education” as the way to achieve this development of women", the Bishops recall, claiming they do not believe "that these are the issues that truly concern the development of women and humanity at large". Any meaningful summit will be expected to focus on a program that targets actions that "will uplift women and children living in extreme poverty, migration, strategies for development, literacy and education, encouraging the culture of peace, supporting the family as basic unit of society, ending violence against women".
"We reject the introduction of these ideologies centered on gender, and other alien practices, which go against our African culture and our religious heritage. We view this agenda as an intent to corrupt our Youth and enslave them to foreign ideologies, for example, same sex union and active homosexual activities". (L.M.) (Agenzia Fides, 12/11/2019)

AMERICA/MEXICO - The Bishops in the face of the current situation: "We are committed to life and human dignity"