ASIA/AFGHANISTAN - The "School of Peace" expands, while 3.7 million children are without school 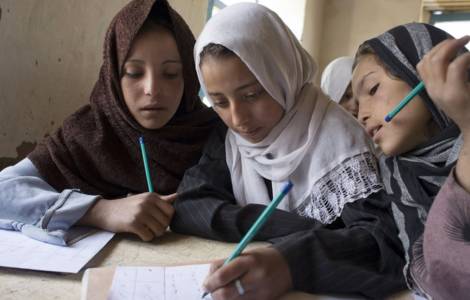 Kabul (Agenzia Fides) - The "Tangi Kalay - School of Peace", was established with the efforts of Italian Barnabite missionary, Father Giuseppe Moretti in Afghanistan and is one of the few "oases in the desert" for the literacy work carried out in Afghanistan. Because of the present conflict and tensions, in fact, the education sector is one of the most affected: in fact, 700 institutes have been closed in the last 18 years, with 3.7 million students left without a school. "Afghanistan is in a difficult situation given the post-election confusion, but our school moves forward. Indeed it is growing: recently, I was asked by the director to help purchase 24 new blackboards", says to Fides Giuseppe Moretti, a missionary in Afghanistan from 1990 to 2015.
He returned to Kabul last July to temporarily replace his confrere, Father Giovanni Scalese, currently responsible for the Missio sui iuris in Afghanistan. Fr. Moretti said he could not go to school, but is constantly in contact with the administration: "For security reasons, I was not allowed to leave Kabul. The so-called 'green zone', the area where many of the embassies and offices in which foreigners work is located, has become a fort full of walls, now further armored due to the increase in attacks. Our school has not been touched by attacks, but rather expands its service for new students".
The "Tangi Kalay - School of Peace" is a state institute, with programs and teachers chosen by the Afghan government, but continues to operate with private aid, including those donated by various military contingents, which help the school by providing school materials, scientific and IT laboratories. Today the institute is home to over 3,000 children and, in the training curriculum, also aims to teach them the values of peace and acceptance.
According to data collected by the Human Rights Unit of the United Nations Aid Mission in Afghanistan (UNAMA), 2,461 Afghan children have been victims of attacks during the first nine months of 2019: of these, 631 died and 1830 were injured. The number has grown by 11% compared to the same period in 2018, a phenomenon that is mainly explained by the increase in attacks carried out near schools and health centers.
According to the NGO "Save the Children", 3.8 million Afghan children need humanitarian assistance and 600,000 are suffering from severe malnutrition, while about 3.7 million are without school, 60% are girls. (LF) (Agenzia Fides, 9/11/2019)

ASIA/LEBANON - Food banks in parishes, free medical services: the resilience of the Lebanese in the face of the crisis