AMERICA/BOLIVIA - The Church reaffirms commitment to justice, truth and the common good 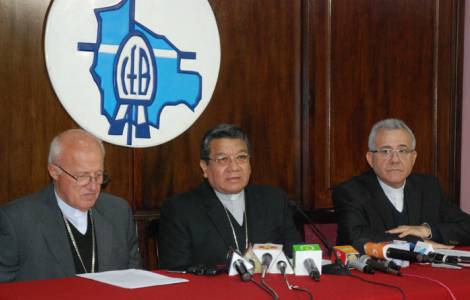 La Paz (Agenzia Fides) - With the declaration "Understanding and peace, with truth and justice", the Bolivian Bishops' Conference expresses its deep concern about the current situation in the country, calls for an end to the violence among Bolivians and encourages dialogue between the parties to resolve the conflict.
"We ask to listen to the people to maintain democracy, the only system that can guarantee freedom, the common good and development", the Bishops write in the document, sent to Fides, which is dated October 31st. "We consider that a complete, agreed and binding official revision could be the basis for definitive dialogue" the text continues, which explains: "Complete because it considers all the stages of the electoral process and not just the final vote; agreed because it welcomes the opinion of all those involved, and binding because everyone is committed to accepting the results".
The Bishops condemn violence and invitations to confrontations of any kind, between authorities and citizens, and conclude by inviting them to pray for peace in a moment when the country has a particular need for peace and justice.
In a subsequent statement, dated November 2, the General Secretariat of the Episcopal Conference categorically denies the accusations of the Minister of the Presidency, Juan Ramón Quintana, that the Church is responsible for promoting accusations of fraud during the last elections, defining them as "totally false and lacking any foundation", reiterating that the Bolivian Church" is at the service of justice, truth and the common good".
Meanwhile, the coordinator of the mission of the Organization of American States (OAS), Arturo Espinosa, has announced his resignation from the office, and immediately the OAS has informed that the work of verification of the electoral process and the calculation of the votes will go ahead with the thirty OSA technicians who will have a new coordinator as soon as possible. Last week Espinosa published a very critical article on the Bolivian elections and on Morales, above all on the extension of his presidential mandate.
The diplomat arrived in La Paz on Thursday 31 October, together with the team of technicians sent by the OAS, to investigate the alleged electoral fraud, denounced by the opposition, on the 20 October elections. Following the election of the electoral result by the Supreme Electoral Court (TSE), with the victory of outgoing president Morales, days of strong protests followed and violent clashes between the supporters of Morales and those of Mesa, which caused 2 deaths.
(CE) (Agenzia Fides, 4/11/2019)