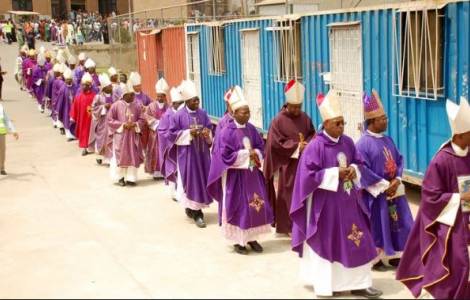 Benin city (Agenzia Fides) - After his speech at the National Missionary Congress of Nigeria, in Benin city, on the theme "The Church of Christ in Mission in Nigeria" (see Fides, 24/10/2019), Archbishop Giampietro Dal Toso , President of the Pontifical Mission Societies (PMS), met the Bishops of the African country.
In his speech, the Archbishop stressed that, after having welcomed many generous missionaries who founded and strengthened them, it is now the turn of these Chuches to extend and further deepen this great task of evangelization, both for the consolidation of the Christian faith and for the announcement of the Gospel to non-Christians. Then the President of the PMS thanked the many priests and religious brothers and sisters, who have now become missionaries in other countries and many migrated communities in many parts of the world are a great inspiration for the Christian communities that welcome them.
Mgr. Dal Toso then outlined the role of the Pontifical Mission Societies, too often reduced to a mere financial aspect, while "the PMS, as a matter of fact, can make an important contribution to your work of evangelization", he pointed out. In his reflection, the Archbishop recalled why the PMS were founded, the specific nature of the four Pontifical Mission Societies, their founders, the references of the missionary teaching, their structure and the charisma that distinguishes them.
Moving on to their theological identity, he then addressed two important topics: the relationship between local and universal Church, and the correlation between faith and mission.
The second topic was the relationship of the Bishops with the national Directions of the PMS. By their very nature, the PMS are both universal and local, they belong to the Holy Father and also to the Bishops, because without the Bishop's support in loco, they would not be able to carry out our task. Another essential aspect is the regular contact of the National Director with the Bishops, in particular with the President of the Episcopal Conference.
After citing the tasks entrusted to the National Directions of the PMS, the Archbishop concluded his speech with some practical indications: structure of the PMS staff at a diocesan and national level; promotion of the Pontifical Society of the Holy Childhood as an ordinary form of pastoral care for children; usefulness of the Pontifical Missionary Union to motivate faithful and clergy to missionary commitment; collaboration with the Pontifical Society of St. Peter the Apostle for missionary promotion in seminaries; collaboration with the new charisms that arose after the Second Vatican Council; importance of catechist formation. (SL) (Agenzia Fides, 26/10/2019)