OCEANIA/AUSTRALIA - The profile of the Australian Catholic community: a Report of the Pastoral Research Center 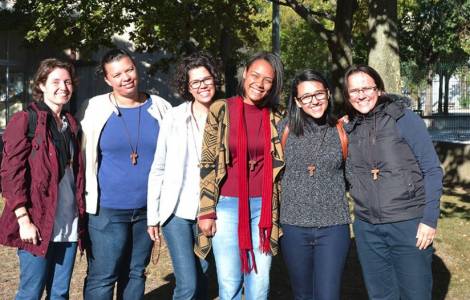 2020-01-30
Solidarity and community: coordination of Catholic bodies to help victims of fires

Sydney (Agenzia Fides) - Of the more than 5 million Catholics surveyed in Australia, 1,304,993 were born overseas, 136,360 do not speak English well and 305,823 live in poverty: these are some of the data in a Report on social profiles of the Australian dioceses, published by the National Center for Pastoral Research of the Australian Catholic Church. The document, sent to Agenzia Fides, provides an in-depth look at the demography of the Catholic population in all the dioceses. According to reports, in Australia there are 5,291,834 Catholics, a figure equal to 22.6% of the population.
The picture presented was possible thanks to data from the 2016 census of the Australian "Bureau of Statistics", a government body and therefore takes into account only those people who, during the survey, declared themselves openly Catholic, leaving out many others. According to data from the Pontifical Statistical Yearbook, which reports numbers collected directly from local parishes, in fact, there are 6.5 million Australian Catholics.
The survey of the National Center for the Pastoral Research of the Australian Church, however, represents a useful pastoral tool, because it highlights the presence of phenomena that place the local Church in the face of new challenges.
"These profiles give Church ministers a key tool for understanding the Catholic population in their area and can be used to adapt ministries to the real needs of communities", explained the director of the National Center for Pastoral Research, Trudy Dantis in a statement sent to Agenzia Fides.
"If a community has a large percentage of people in difficulty with English, the diocese may have to guarantee its services in other languages to meet the pastoral needs of that group of faithful. In the same way, the knowledge of the average income of people can help the parish and the diocese to study new ways to reach families that live in poverty", adds Dantis explaining that, in this first phase, the Report shows relative data to the dioceses, but since the beginning of 2020 the parish priests can also count on the detailed data of the individual pastoral communities.
From the document, however, it is possible to notice how the life of Catholics can vary greatly in different parts of the country: "In general, over the last few years, there has been a decline in the Catholic population: according to the 2011 census, in fact, there were 5,439,267 faithful in Australia, while the latest available data show that the number dropped to 5,291,834. An in-depth analysis shows that this phenomenon did not occur in all the dioceses. In the circumscriptions of Wollongong, Sale, Rockhampton, Perth and Bunbury, for example, a numerical growth of the Catholic population has been recorded", concludes Dantis. (LF) (Agenzia Fides, 25/10/2019)