AFRICA/IVORY COAST - Extraordinary Missionary Month: "The Lord asks you to be a gift wherever you are" 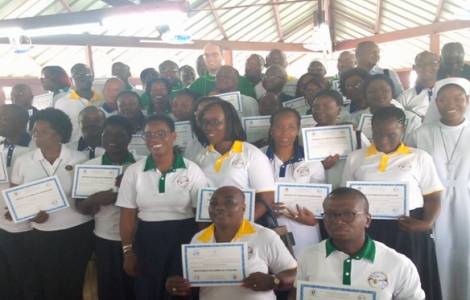 2020-11-28
The National Director of the PMS: "The nation needs peace, solidarity and fraternity"

Abidjan (Agenzia Fides) - "We become missionaries living as witnesses of the Gospel of Christ, not with words, not with diplomas or certificates, but with life": this was underlined by Father Lucas Marabezé, interim charge d'affaires of the Apostolic Nunciature in Ivory Coast, during the ceremony of awarding diplomas in Missiology, at the Catholic University of West Africa, delivered to 62 lay people. The ceremony was organized on the occasion of World Mission Sunday, the culmination of the Extraordinary Missionary Month. Fr. Marabezé added that no one is excluded from the mission of the Church: "Anyone, father or mother, the young, laborer, waiter, unemployed, the sick in a hospital bed, the Lord asks everyone to be a gift in whatever condition we find ourselves".
According to what Solange Siloue, of the Pontifical Mission Societies of the Ivory Coast told Agenzia Fides, the academic recognition was delivered on Sunday 20 October, during the Holy Mass presided by Father Gaston Ogui, coordinator of missiological formation, who held the homily and recalled the missionary mandate and the theme of the extraordinary missionary Month, "Baptized and sent", urging the students to "go towards the other, to repeat the characteristic traits of the missionary Christ".
The students, on their behalf, expressed their gratitude for having had the opportunity to attend the formation course, which started in the country in 2017, aware of the strength of this missionary commitment in following Christ.
The missiological formation area promoted by the Catholic University of West Africa/University Unit of Abidjan, in collaboration with the Catholic Missionary Institute of Abidjan and the Jesuit Faculty of Theology of Africa and Madagascar, supported by the Pontifical Missionary Union (PUM), was established in the Ivory Coast in 2017 with the main objective of "decentralizing the PUM activities in order to strengthen the faith and Christian identity among the faithful of mission countries, specifically in the Church in Sub-Saharan Africa". (SS/AP) (Agenzia Fides, 24/10/2019)