AMERICA/ECUADOR - After the protests: dialogue and reconciliation underway, with the mediation of the Bishops 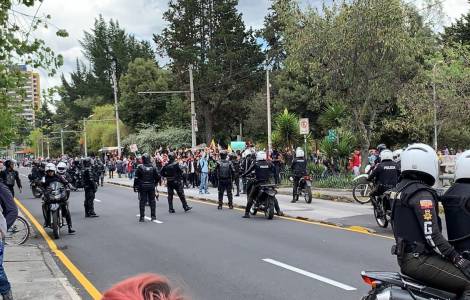 Quito (Agenzia Fides) - On Wednesday, October 23, four representatives of the Ecuadorian Bishops' Conference (EEC) went to the headquarters of the government. The delegation was composed of Mgr. Luis Cabrera, Archbishop of Guayaquil, Vice President of the Bishops' Conference; Mgr. Alfredo Espinosa, Archbishop of Quito; Mgr. René Coba, Military Ordinary, Secretary of the EEC, and Mgr. Danilo Echeverría, Auxiliary of Quito, representative of the EEC family sector. The President of the EEC is currently in Rome to participate in the Synod of Bishops.
Although the meeting took place behind closed doors, some information was released to the press. The President of Ecuador, Lenín Moreno, thanked the Bishops "on behalf of the country, the State and the Government" for the function of mediators assumed in these difficult moments, fruit of the result of misunderstanding and lack of dialogue. The President spoke of the "arrogance of those who believe they have the right to remain indefinitely in power, or in an intransigent position", alluding to what happened in the country (see Fides 9/10/2019).
Moreno especially thanked the Unified Workers Front (UWF) for having suspended the events scheduled for October 30th.
For his part, Mgr. Cabrera emphasized the government's invitation to the Bishops' Conference to be a mediator for dialogue with the indigenous movement of the country, according to a note sent to Fides. He then insisted that "there is the hope of of reaching specific agreements, not to please the groups in dialogue, but the whole country". The Vice-President of the EEC concluded his speech by announcing the challenge of starting a process of reconciliation and peace.
President Lenín Moreno, in various sessions, then met with representatives of social groups and trade unions, especially those of transport, to define the modalities and timing of subsidies for gasoline, a topic that had triggered protests.
The demonstrations ended on October 13, following the government's abrogation of the controversial decree on subsidies, with a tragic toll of 8 dead, over 1,300 wounded and a thousand arrests, according to a report by the Defensoria del Pueblo. The end of the protests opened a direct dialogue between the government and the indigenous movement, with the mediation of the Episcopate and the United Nations office in Ecuador. (CE) (Agenzia Fides, 24/10/2019)

NEWS ANALYSIS - Africa, the sisters of the Good Shepherd alongside the exploited of cobalt

AMERICA/PARAGUAY - The Bishops: "the first work of charity today is to follow the indications of the civil and ecclesiastical authorities"

ASIA/NEPAL - Evangelizing with the Word, in times of pandemic: online Bible courses for lay people