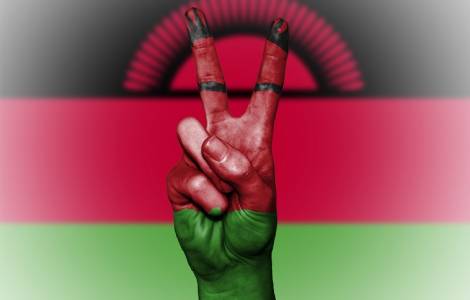 2019-11-14
A political solution is urgent: the Bishops call for dialogue

Lilongwe (Agenzia Fides) - The results of the presidential elections held last May 21, 2019 (see Fides, 21/5/2019) are still being disputed and the issue has been brought to court. Mgr. Gianfranco Gallone, Apostolic Nuncio in Malawi and Zambia expressed strong concern. In the note sent to Agenzia Fides, we read that, during his first Mass celebrated in Malawi, in the Cathedral of Maula, on the occasion of his visit to the country, the Nuncio urged the Church and the entire population "to pray for the country that is going through serious political unrest". In his homily, Archbishop Gallon asked the faithful "to remain firm in faith and to make prayer prevail over everything".
In this phase of tension, the commitment of the local Catholic Church is enormous, as it has promoted a prayer for peace, unity and reconciliation in the country on a national level.
"When there will be an official seat of the Nunciature, even here in Malawi it will be easier to carry out the service that the Holy See invites us to do", said the Apostolic Nuncio in reference to the projects that are already in progress.
Mgr. Thomas Luke Msusa, President of the Bishops' Conference of Malawi, Archbishop of Blantyre, reiterated the "firm condemnation of the Catholic Church for the violent protests that led to the loss of lives and multiple resources". Archbishop Msusa also recalled the appeal to prayer, to which the entire Church of Malawi adhered, in the context of the day dedicated at a national level to peace, unity and reconciliation in Malawi.
Archbishop Gallone presented his credentials to the Malawian President, Peter Mutharika, on September 6th, and this was his first Mass in the country. Prior to his current appointment, Bishop Gallone was nuncio in Mozambique, Israel, Slovakia, India and Sweden. (AP) (Agenzia Fides, 23/10/2019)