AMERICA/HAITI - "Listen to the voice of wisdom": the appeal of the Bishops to the President and the government in the face of the suffering of the people 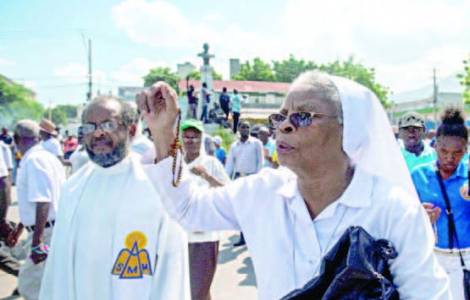 Port au Prince (Agenzia Fides) - The representatives of the Haitian Catholic Church have asked President Jovenel Moise, and the political class in general, to listen to the "voice of wisdom" in the face of the "serious" and "difficult" situation the Caribbean nation is going through. Yesterday, 22 October, the Archbishop of Port-au-Prince, Mgr. Max Leroy Mésidor, speaking in the Cathedral of the capital full of people, reiterated that "something must change in this country", quoting the words of Pope John Paul II when he visited Haiti, 36 years ago. "In the face of this dangerous situation, I invite the Head of State, Parliament, the political class and all those who want to help Haiti, to listen to the voice of wisdom", he said to hundreds of faithful who shortly before had marched, crossing the streets of Port-au-Prince.
The Archbishop has constantly insisted on the involvement of the Catholic Church alongside the Haitian people, also for some demonstrations that have been taking place in the country for six weeks, asking for the resignation of President Moise. Yesterday's demonstration was announced by the Catholic Church, inviting the faithful of the parishes to come together in the Cathedral on the day of the liturgical feast of St. John Paul II, who visited Haiti in March 1983. Thousands of Catholics gathered.
"Too many people die in the country and God's righteousness will come true at all costs", said Archbishop Mésidor during the prayer in the Cathedral, and he confessed he cried when he looked at the list of people killed in the protests. Finally he asked Haitian leaders to listen to the misery and cries of anguish of the people. Many of those present kept shouting "Jovenel must leave", "Jovenel must leave", "Too much blood has been spilled, Jovenel has to leave".
The situation in the Haitian capital is increasingly tense, and universities and schools have been closed for a month. The demonstrations of social and political groups against the current government authorities continue one after the other. This time it seems that the whole population speaks against the President's policy. However, President Moise reiterated that he has no plans to resign from the post he has held since 2017. The constitutional period for which he was elected is five years, he recalled.
Although the problem of fuel supply has been solved, a cause that triggered the first popular protests, Haitians continue to demonstrate against corruption and lack of services, as well as the cost of living (see Fides, 10/10/2019). In this situation not even NGOs and Catholic bodies, such as religious congregations, Caritas or Catholic Relief Services, manage to carry out their service (see Fides, 1/10/2019). (CE) (Agenzia Fides, 23/10/2019)