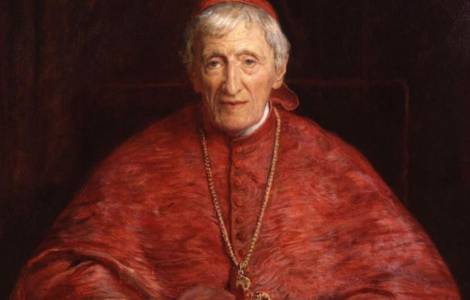 2020-07-17
Assistance from the PMS Fund for the Covid emergency sent to Niger, Gambia and Zambia

Vatican City (Agenzia Fides) - "John Henry Newman, a year before his death, in 1879, created Cardinal by Pope Leo XIII, chose as his motto the expression, 'Cor ad cor loquitur', which recalled St. Augustin, summarizing the depth of his intellectual and spiritual path of research. The Church today, determined to perceive herself and to work "as missionary that goes forth" towards the "whole" of all, has the awareness of enjoying the good of her testimony and of her vast work of searching for the truth. She knows she can rely on him as a master of the charity of man's integral knowledge illuminated by Christian Revelation": this is how Cardinal Fernando Filoni, Prefect of the Congregation for the Evangelization of Peoples expressed himself, who attended, as Grand Chancellor, the extraordinary academic Act in honor of Blessed John Henry Newman, organized on 11 October at the Pontifical Urbaniana University. John Henry Newman - who, already blessed in 2010 by Pope Benedict XVI, will be canonized by Pope Francis on Sunday 13 October - was a "famous and beloved student" of the Urbaniana from 9 November 1846 until 28 June 1847.
The Cardinal expressed "satisfaction for having given life to this moment of reflection on the meaning of holiness and the doctrine of a singular son and of the Anglican Church (before) and of the Catholic Church (after)".
"Having completed his theological studies at the College of Propaganda Fide and ordained a priest on May 30, 1847 in the chapel inside the College - the Prefect recalled - Newman returned to England where, in 1848, he founded the first English Oratory of St. Filippo Neri in Birmingham, initiating a new season of studies and pastoral activity: he accepted the invitation of Archbishop Cullen to found the first Irish Catholic University and was the first Rector from 1851 to 1856".
In the following years Newman first experienced misunderstandings on the Catholic side mainly because of his ideas on the "consensus fidelium" as an integral part of Church matters of faith and then - continued Cardinal Filoni - after the Decrees of the Vatican Council I, a certain hostility on behalf of members of the Anglican Church.
The Grand Chancellor remarked: "His presence in the Church reborn with the event of the Second Vatican Council remains alive even in this hour of the full realization of the teachings generated by it", hinting then at the bond between Newman and the renewal of the Church outlined by the II Vatican.
"A year before the closing of the conciliar works, Catholic philosopher Jean Guitton in L'Osservatore Romano of 1964 observed: "The great geniuses are prophets always ready to illuminate the great events, which, in turn, throw on the great geniuses a retrospective light that gives them a prophetic character: it is like the relationship between Isaiah and the passion of Christ, mutually enlightened: thus Newman illuminates the Council with the presence of the Council and justifies Newman".
The Cardinal noted "the many and profound signs" of "mutual enlightenment": the role of the laity in all the expressions of life and mission of the Church; the ecumenical tension as the permanent task of the one Church of Christ; the primacy of personal conscience, defined by him as "the original vicar of Christ", and the consequent correct doctrine on religious freedom; the fruitful relationship between faith and reason as between Revelation and the knowledge of modern sciences. Cardinal Filoni asked those present: "Doesn't he appear to be an Augustine of modern times?"
Speaking of the Newmanian conception of conscience, the Cardinal quoted an article published in the magazine "Euntes Docete" of 1990, in which Cardinal Joseph Ratzinger highlighted his "truthful" character: "According to Newman, conscience - wrote the future Pope Benedict XVI - must be nourished as a way of obedience to objective truth"; and he then explained the "dialogicity between faith and reason, as a remedy for the arrogance of reason and the blindness of faith".
The Prefect concluded by wishing Urbaniana University "to distinguish itself as a place and laboratory of integral and universal moral and intellectual formation": "As conceived by Newman, the University must be permanently open, listen to every culture, religious faith and form of knowledge, and learn to learn 'from human and divine objective reality". (PA) (Agenzia Fides, 12/10/2019)

VATICAN - Consistory for 13 new Cardinals: "their origin expresses the missionary vocation of the Church"