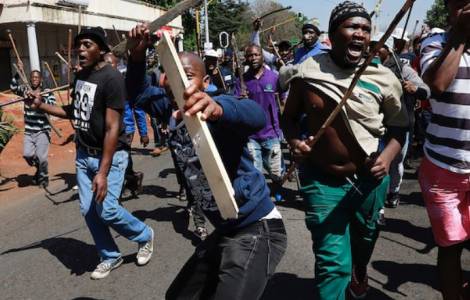 2019-09-13
Xenophobia: stance taken by the Bishops of Southern Africa

Johannesburg (Agenzia Fides) - Inequalities, lack of services, unscrupulous politicians: this is the explosive mix that triggered xenophobic violence in South Africa. A phenomenon, that of xenophobia against migrants, which cyclically returns with raids that destroy homes, shops, small workshops and cause dozens of victims. "After the attacks of the first days of September that caused dozens of deaths – explains Pablo Velasquez, a Scalabrinian religious who works in the suburbs of Johannesburg, to Fides - calm has returned to the city, but there is still so much fear. I spent some time in an irregular refugee camp where Zimbabweans, Mozambicans, Somalis, Ethiopians, Nigerians, Ghanaians, Congolese live. People do not trust leaving the area to go to the city to sell their poor goods. They fear being abused, beaten, that their things can be destroyed".
But where does all this hatred towards a foreigner come from? There is no single reason, but a set of reasons. "Twenty years of democracy - Father Pablo continues - have not solved the Country's problems. The differences between the rich, most of them white, and the poor is still enormous. Unemployment is very high (officially it is at 30%, but it is probably higher, ed). In many rural areas basic services are lacking: water, electricity, telephone lines, gas, roads, schools. The problem of housing is very felt. All this causes strong tensions".
Many South Africans move from the countryside to the townships (the slums) of the big cities. Here they meet immigrants, equally poor. "In many black South Africans - observes Father Pablo - the sense of inferiority imposed for decades by the segregation regime of the Boer whites is still alive. The fact that they have always been treated as 'second-class citizens' means that their frustration is poured out to immigrants who are the last of the last today. Many South Africans see the newcomers as a new enemy to fight because they could take away their few resources. Thus, violent pogroms are triggered that destroy migrants' activities and, in some cases, kill foreigners".
The priest explains: "Some politicians fuel hatred and instigate violence. I am thinking, for example, of Jules Malema, at the head of the Economic Freedom Fighter, an extreme leftist group that first accused immigrants of every wickedness and then turned its fiery words on the whites. It distills hatred that permeates society and ignites spirits. The Catholic Church, although a minority in the Country, has raised its cry against these xenophobic acts. Archbishop Buti Tlhagale of Johannesburg compared xenophobia to Nazism. He is right. If we do not stop these acts immediately, we will find ourselves faced with unparalleled violence". (ES) (Agenzia Fides, 12/10/2019)