AMERICA/NICARAGUA - Cardinal Brenes: "We continue to pray for those who disagree and persecute us" 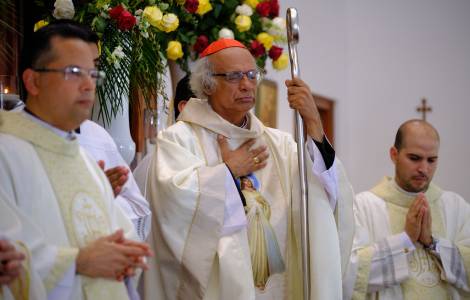 2020-02-27
Hate, blood and death: a heartfelt SOS to the international community

2020-02-17
The Bishop of Matagalpa presents an "ethical decalogue" for politicians; the release of all prisoners is still awaited

2020-02-13
Elections, a light of hope for the country that must be nurtured and protected

2020-01-16
New intimidations denounced against the Church, the unity of the people to build a new Nicaragua

2020-01-07
Card. Brenes asks to continue to work for the release of all political prisoners and for peace

2019-12-10
Mgr. Baez celebrated the feast of the Immaculate Conception with the Nicaraguan community of Miami

Managua (Agenzia Fides) - The Archbishop of Managua, Cardinal Leopoldo Brenes, after the Sunday Eucharistic celebration on October 6, answered journalists' questions about the provocations of the military in some parishes on the occasion of liturgical celebrations and on the comments of politicians. The Cardinal confirmed that this does not happen only with Father Edwin Román (see Fides, 29/8/2019), but it also occurs in several parishes in the country, and concluded: "We continue to pray for those who disagree with us, for those who speak ill of us and persecute us".
Cardinal Brenes also clarified the comparison that was referred to him by a politician between President Ortega and Jesus: "Not even the best men of God have ever compared themselves to Jesus, precisely in this Missionary Month the Holy Father has us offered so many examples to follow, of people who have even given their lives as missionaries, but nobody, I mean nobody, has ever compared themselves to Jesus. I do not know these (political) people, but it may be that they did it out of ignorance or for the desire to be noticed".
With regards to violence, especially on the coast and in some communities in the north of the Country, the Cardinal joined the requests made by the Bishops of the area, asking for an end to the violence. He stressed the existence of armed groups, outside the law, that have committed various crimes in this area. "This is a culture of death, of lack of respect for life", he said, recalling the more than 48 women killed, to which is added the latest case of the young North American killed in Matagalpa.
According to information gathered by Fides, violence has increased in various inland areas of the country, where peasant leaders have also been killed. In the last two weeks the Nicaraguan Peasant Movement has made itself heard with protests and demonstrations following the news on the possibility of resuming the mega project of the Interoceanic Canal (see Fides, 15/06/2015, 22/04/2016, 30/11/2016), to which the Movement has always opposed for many reasons.
From the statements of Medardo Mairena, Coordinator of the Peasant Movement, came the confirmation that farmers and peasants from Nicaragua have mobilized against the project for 6 years. The struggle began for the defense of the lands and since April 2018 it has supported the claims of the students. Several of them suffered exile, prison and even death to face the regime of Daniel Ortega. Medardo Mairena reminded the press that the Farmer Movement is a living reality, a protagonist of the country's economic and social life. (CE) (Agenzia Fides, 8/10/2019)

ASIA/IRAQ - Iraqi parliamentarians of the Christian component: we will not vote for confidence in the Allawi government