VATICAN - The Pope opens the Synod for the Amazon: "do not extinguish the fire of mission" 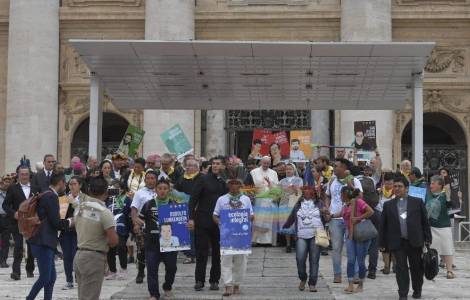 Vatican City (Agenzia Fides) - "Rekindling our gift in the fire of the Spirit is the opposite of letting things take their course without doing anything. Fidelity to the newness of the Spirit is a grace that we must ask for in prayer. May the Spirit, who makes all things new, give us his own daring prudence; may he inspire our Synod to renew the paths of the Church in Amazonia, so that the fire of mission will continue to burn". This is the vibrant appeal of Pope Francis in the Vatican Basilica yesterday morning, Sunday 6 October, during the Mass which he presided over for the inauguration of the Special Assembly of the Synod of Bishops on the theme "Amazonia: new paths for the Church and for an integral ecology". Together with the Holy Father 184 synodal fathers, of whom 113 from the various Pan-Amazonian ecclesiastical districts, representing the nine states of the Region (Brazil, Venezuela, Colombia, Ecuador, Bolivia, Peru, French Guyana, the Cooperative Republic of Guyana and Suriname).
The Holy Father was inspired by the words of the Apostle Paul, "the greatest missionary in the Church’s history", helps us to make this “synod”, this “journey together”: "His words to Timothy seem addressed to us, as pastors in the service of God’s People". Then he continued: "We are bishops because we have received a gift of God. We did not sign an agreement; we were not handed an employment contract. Rather, hands were laid on our heads so that we in turn might be hands raised to intercede before the Father, helping hands extended to our brothers and sisters. We received a gift so that we might become a gift. Gifts are not bought, traded or sold; they are received and given away. If we hold on to them, if we make ourselves the centre and not the gift we have received, we become bureaucrats, not shepherds. We turn the gift into a job and its gratuitousness vanishes. We end up serving ourselves and using the Church".
He then recalled that to be faithful to the mission received, the Bishops are called to "rekindle" the gift of God: "The fire that rekindles the gift is the Holy Spirit, the giver of gifts". God’s fire "is the fire of love that illumines, warms and gives life, not a fire that blazes up and devours. When peoples and cultures are devoured without love and without respect, it is not God’s fire but that of the world… The fire of God is warmth that attracts and gathers into unity. It is fed by sharing, not by profits. The fire that destroys, on the other hand, blazes up when people want to promote only their own ideas, form their own group, wipe out differences in the attempt to make everyone and everything uniform".
Still inspired by the words of Saint Paul, the Pope emphasized the importance of witnessing: the Apostle "asks Timothy to bear witness to the Gospel, to suffer for the Gospel, in a word, to live for the Gospel.
The proclamation of the Gospel is the chief criterion of the Church’s life, it is her mission, her identity… To preach the Gospel is to live as an offering, to bear witness to the end, to become all things to all people, to love even to the point of martyrdom".
Pope Francis concluded the homily by inviting us to look to the Crucified Jesus, "to his heart pierced for our salvation. Let us begin there, the source of the gift that has given us birth. From that heart, the Spirit who renews has been poured forth. Let each and every one of us, then, feel called to give life". He then recalled that "many of our brothers and sisters in Amazonia are bearing heavy crosses and awaiting the liberating consolation of the Gospel, the Church’s caress of love. So many of our brothers and sisters in Amazonia have given their lives... " and urged: "For them and for all those who have given their lives and those who are still giving their lives, and with them, let us journey together". (SL) (Agenzia Fides, 7/10/2019)