AMERICA/PERU - In the face of the crisis, Mgr. Cabrejos calls for "political maturity for the 33 million Peruvians 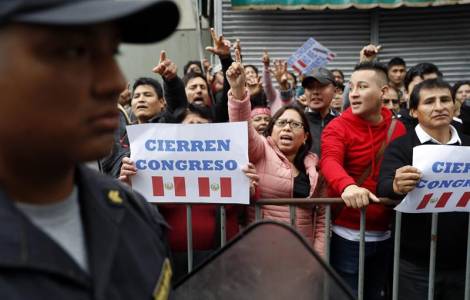 2020-05-23
Covid-19, the Salesians close to the last through concrete gestures of solidarity"

2020-03-31
Solidarity, the strength to overcome the health emergency

Vatican City (Agenzia Fides) - From the Vatican, where he is to participate in the Synod on the Amazon, the President of the Peruvian Episcopal Conference, sent Agenzia Fides a declaration on the crisis that opened in Peru after the President of the Republic, Martín Vizcarra, dissolved the Peruvian Parliament. In fact, the President informed on Monday 30 September that, using the powers conferred by the Constitution, decided to dissolve the Parliament, dominated by the opposition of Fujimori’s party, after refusing to suspend the controversial appointments of new members of the Constitutional Court. He also called elections for January 2020.
Mgr. Héctor Miguel Cabrejos Vidarte OFM, President of the Episcopal Conference, says in his statement: "The serious situation that today characterizes Peruvian politics should lead us to a profound reflection, providing concrete and responsible answers and avoiding revenge and/or in complicity, thus demonstrating political and social maturity in Peru and international community. Despite this political crisis, we believe that the present moment is also a unique opportunity to fight corruption, at all levels... we cannot lose the prospect of profoundly changing adverse situations and improve as a country, morally and with respect for the common good, because we must not only think of social and political groups, but also of the over 33 million Peruvians, especially our children and young people, who are the future of Peru".
It is not the first time that Archbishop Cabrejos Vidarte, Archbishop of Trujillo, faces a political situation of this gravity. A few days ago elected to the Presidency of the Bishops' Conference (March 2018), he found himself expressing the concern of the Catholic Church in Peru for the resignation of President Pedro Pablo Kuczynski, involved in episodes of corruption. In the face of cases of corruption of Presidents Alberto Fujimori, Alejandro Toledo, Alan García, Ollanta Humala and Pedro Pablo Kuczynski, the Peruvian Bishops, under the guidance of Mgr. Cabrejos, wrote: "We have reached a point of political rupture to the point that a new beginning requires not only a change of command but also the ethical and moral recovery of the country at all levels, because high levels of corruption steal hope, especially from the poor and the young.That is why we must recover the ethical and moral values that built the essence of our Peru. In this crucial moment, it is urgent to put the common good first in front of particular interests ... Fulfilling the constitutional duty to govern is a responsibility of all the powers of the state" (see Fides, 23/3/2018). (CE) (Agenzia Fides, 2/10/2019)

AMERICA/COLOMBIA - Covid 19: social pastoral workers are a bridge among people in need