ASIA/PHILIPPINES - Cardinal Tagle: small acts of charity to reduce poverty in the country and in the world 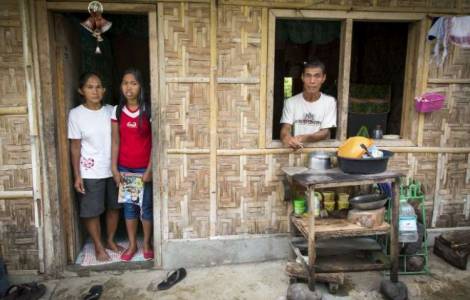 Manila (Agenzia Fides) - Cardinal Luis Antonio Tagle of Manila wants to expand a program currently underway in the Archdiocese of Manila to all the Philippines and also abroad, which has the aim of reducing poverty and caring for the poor. This was announced by the Cardinal on the occasion of the 15th anniversary of the "Pondo ng Pinoy" program (PnP, that is "Funds for the Filipinos"), a charity program which is active in the Archdiocese of Manila.
"There is nothing wrong with dreaming. Now, there are many Filipinos outside the country, so perhaps in the future we could bring the PnP to the Filipinos and to others abroad", remarked Cardinal Tagle, who is also the President of "Caritas Internationalis" the great global network of Catholic charitable organizations composed of 165 national Caritas.
Started in 2004 by then Cardinal Gaudencio Rosales, Archbishop of Manila, to allow Filipinos to help others with the minimum they can afford, the program urges people to save at least 25 cents (six US cents) each day as an expression of attention and help for the poor.
The "Theology of crumbs" is the criterion that inspires the PnP project. It is based on the idea that if each family sets aside 25 cents a day, the Church would have enough funds to help the most needy children, women and families. PnP encourages every person, "no matter how poor, no matter how humble, to give for free".
Through small acts of "love", people create a vast network of solidarity - a kind of "widespread charity" in which "everyone gives what little they can give". By giving a small amount, even a relatively poor person can faithfully carry out "the act of love for God" through service to others.
Today the Fund supports thousands of projects in the fields of health, livelihood and development, education, housing, offering subsidies for children and women. PnP allows people to show solidarity in the simplest way possible and through small gestures. "Through a minimum generosity one can reach the sky so that one does not become deaf to the suffering of others", notes the Cardinal, who intends to take the movement abroad by involving the more than 10 million Filipinos living abroad.
The Cardinal also hopes that the PnP will be able to help not only Filipinos but also the needy of other nations.
In 15 years, the collection of so-called "crumbs" amounted to 7.7 million dollars, translated into aid projects for the emancipation of poor communities.
Father Benjie Francisco, who chairs the unity of PnP programs, told Fides that "most of the donors are students, families and people from different walks of life". An estimated 260,000 people have already benefited from more than 1,500 PnP promoted projects in the areas of health and nutrition, livelihood, education, housing and emergency aid. "And an ever increasing number of people continue to benefit from it thanks to those 25 cents", says Fr. Francisco.
The principle behind the PnP explains is that "small acts of goodness frequently and constantly bring the Kingdom of God".
To date, the movement operates in at least 30 dioceses throughout the country. "The PnP initiative emphasizes the importance of compassion among the faithful. It teaches and shows us how to live the most important commandment of God: love towards one’s neighbor. It becomes an antidote to greed and a precious reminder in this moment of crisis", says to Fides a mother Lei Reys of five small children.
"While some companies and private donors donate large sums of money, most donations are 25 cents", notes Henrietta de Villa, former director of PnP.
The Church in the Philippines is trying to make the basic idea of the fund a "way of conversion" and an "act of evangelization".
"PnP is not just about raising funds for the poor. It has become a lifestyle, a movement that allows us to help our less fortunate brothers and sisters", explains Father Vic Apacible of the Archdiocese of Manila. "It is a way of life that takes us to Heaven by promoting attention for the poor".
Through donations, hundreds of homes have been built for poor families and thousands of malnourished children are fed every day. Contributions are also used to provide small entrepreneurs with small initial capital in micro-entrepreneurial activities. (SD) (Agenzia Fides, 1/10/2019)

OCEANIA/AUSTRALIA - Solidarity and community: coordination of Catholic bodies to help victims of fires

ASIA/KYRGYZSTAN - A home for needy children on Issyk-Kul Lake