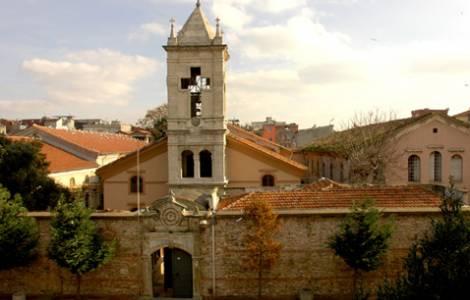 Istanbul (Agenzia Fides) - At the forthcoming election of the Armenian Patriarch of Constantinople, scheduled for next December, members of the elected bodies will be able to orient their preferences only towards candidates resident in Turkey. This was established by the Turkish Ministry of the Interior, with a decree prohibiting the participation in the election of the new Patriarch of candidates residing abroad. The news, released at the end of last week, is causing dismay in the Armenian community in Turkey.
Following a practice inaugurated in 1961, the election of a new Armenian Patriarch of Constantinople is from time to time regulated by rules prepared ad hoc by the Turkish Ministry of the Interior. This time - according to the bilingual Turkish-Armenian newspaper Agos - the normative text for the election of the new Patriarch, six pages long, was delivered on September 23 to the Committee in charge of coordinating the electoral process. This time, among the directives prepared by the Ministry of the Interior, there is also the norm that prescribes the fact of "being among the bishop members of the Armenian Patriarchate of Istanbul" as a condition of eligibility. This condition, which significantly reduces the range of potential candidates - was never contemplated in the analogous regulations prepared since the early 1960s. For this reason, in recent decades, at least two of the Armenian Patriarchs of Constantinople had been elected while lending their ecclesial ministry to other countries. Criticism and concern about the aforementioned norm were also expressed by Archbishop Aram Atesyan, long-standing "locum tenens" of the Patriarchate, during the years of the debilitating illness of Former Patriarch Mesrob II Mutafyan, who died last March.
A few days before receiving the text of the regulation prepared by the Turkish government, exponents of the Communion of the Armenian Apostolic Patriarchate of Constantinople charged with coordinating and accompanying the entire process for the election of the new Patriarch had the very hope that no restrictions were placed on the list of potential candidates for the patriarchal office. The hope (see Fides, 23/9/2019) was expressed in particular by Archbishop Aram Ateşyan himself and by Archbishop Sahak Masalyan, in charge of coordinating the entire electoral process, with the title of "Degabah" (trustee).
At the beginning of August, as reported by Agenzia Fides (see Fides, 9/8/2019), a roadmap was set that will lead to the election of Mesrob's successor. The Commission delegated to prepare the election of the Patriarch of the Apostolic Armenians of Turkey had decided to propose to the Prefecture of Istanbul the days of 7, 8 and 11 December 2019 as dates in which the final phases of the patriarchal election will take place. According to the proposed calendar, on December 7, the religious delegates called to choose the name of the new Patriarch in the list of potential candidates should be elected. The elections of civil delegates should be held on 8 December. Finally, on 11 December, elected delegates should unite to participate in the actual election of the future Patriarch. (GV) (Agenzia Fides, 30/9/2019)