AFRICA/GABON - "The Jubilee was important to reinvigorate the Church in Gabon", says the Nuncio 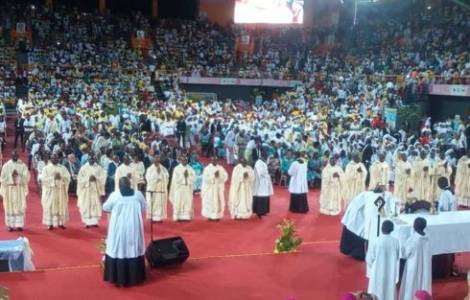 2019-09-30
"The Jubilee was important to reinvigorate the Church in Gabon", says the Nuncio

2019-09-28
"The Jubilee of evangelization in our Country urges us to plan the future", says the Bishop of Port-Gentil

Libreville (Agenzia Fides) - "We are satisfied for the participation of the faithful in the closing ceremony of the Jubilee" says His Exc. Mgr. Francisco Escalante Molina, Apostolic Nuncio in Gabon and in Congo Brazzaville, to Fides, commenting on the solemn ceremony that yesterday, Sunday 29 September, closed the Jubilee for the 175th anniversary of the evangelization of Gabon, which started in September 2018 (see Fides, 27 and 28 September 2019). "The event was held at the Palais des Sports de Libreville, which has a capacity of 5,000 people and was almost full. Therefore there was a good participation of the faithful who came not only from Libreville, but from all the dioceses of the country", emphasizes Mgr. Escalante Molina.
"The ceremony, which lasted 4 hours, during which there was the participation, among others, of Mgr. Giampietro Dal Toso, Assistant Secretary of the Congregation for the Evangelization of Peoples and President of the Pontifical Mission Societies (who on Saturday 28 September held several meetings with the diocesan clergy and religious), His Eminence Cardinal Philippe Nakellentuba Ouédraogo, Archbishop of Ouagadougou, representing the SECAM/SCEAM (Symposium of the Episcopal Conferences of Africa and Madagascar), and some representatives of ACERAC (Association of Episcopal Conferences of the the Central Africa Region). There were also some European Bishops, like that of Toulouse and two Bishops from Sardinia". "Of particular importance was the ordination of 16 new priests from all the dioceses of Gabon, some of whom are religious, both Spiritans (Fathers of the Congregation of the Holy Spirit) and Claretians (Missionary children of the Immaculate Heart of Mary)".
"In representation of the civil authorities there was the Prime Minister, Julien Nkoghe Bekalé, the President of the Senate, that of the Constitutional Court, and other members of the Government" adds the Nuncio. "Then there were the descendants of Mgr. Jean-Rémi Bessieux, the Spiritual Father who founded the Church in Gabon.
"In conclusion of the Jubilee Year we can say that there was a reinvigoration of the Church in Gabon, with a deepening of the meaning of evangelization and mission. I was able to see directly the enormous involvement of local communities during my visits to the various dioceses, to participate in the individual diocesan Jubilees", concludes Archbishop Escalante Molina. (L.M.) (Agenzia Fides, 30/9/2019)