AFRICA/GABON - "The Jubilee of evangelization in our Country urges us to plan the future", says the Bishop of Port-Gentil 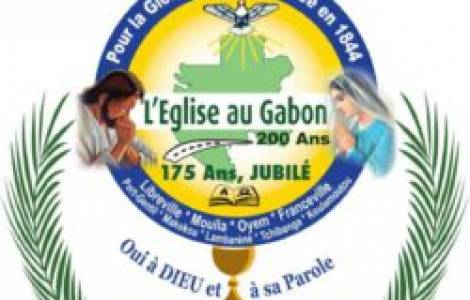 2019-09-30
"The Jubilee was important to reinvigorate the Church in Gabon", says the Nuncio

2019-09-28
"The Jubilee of evangelization in our Country urges us to plan the future", says the Bishop of Port-Gentil

Libreville (Agenzia Fides) - "The Jubilee was an opportunity for the whole Church in Gabon to not only look at its own history but above all to see the present and plan for the future", says to Agenzia Fides Eusebius Chinekezi Ogbonna Managwu, Bishop of Port -Gentil, the second city of Gabon, where tomorrow, Sunday 29 September the Jubilee for the 175th anniversary of the Gabonese evangelization closes, launched in September 2018 (see Fides, 27/09/2019).
"Looking to the future also means fostering new vocations and, not by chance, in our diocese we will close the Jubilee with the ordination of three new priests, during tomorrow's Mass", says Mgr. Chinekezi Ogbonna Managwu. The new priests will be welcomed in the diocese the following Sunday, October 6, with a solemn Mass in the Cathedral of St. Louis.
The Bishop of Port-Gentil says he "thanks the Lord for this jubilee year. In our diocese we celebrated the Jubilee in July. As for the other dioceses, it was an event that involved the whole Church in Gabon, because delegations from all over the country led by their respective Bishops participated".
"In addition to Port-Gentil we have held celebrations and prayers in other areas that are part of our diocese. On each occasion there was a strong participation of the faithful in the proposed events".
"The diocesan celebrations ended with a solemn mass presided by His Exc. Mgr. Mons. Francisco Escalante Molina, Apostolic Nuncio in Gabon and in Congo Brazzaville, in the church of Sant'Anna, the first historic church of the diocese", recalls Mgr. Chinekezi Ogbonna Managwu.
In addition to the Bishops of Gabon, a representation of the Bishops of ACERAC (Association of Episcopal Conferences of the Central African Region comprising Cameroon, Congo Brazzaville, Gabon, Central African Republic, Chad, Equatorial Guinea) will participate in the closing ceremony of the Jubilee of tomorrow. Archbishop Giampietro Dal Toso, Assistant Secretary of the Congregation for the Evangelization of Peoples will be present as President of the Pontifical Mission Societies, to recall the fundamental role of missionaries in spreading the Gospel in the world.
In this regard, Bishop Chinekezi Ogbonna Managwu concludes by emphasizing that "the missionary presence remains important in our diocese. In Port-Gentil we have the Spiritans and Les Frères de Saint Gabriel. As female congregations we have the Salesians, the Sisters of the Immaculate, the Sisters of St. Mary, the Sisters of Charity". (L.M.) (Agenzia Fides, 28/9/2019)