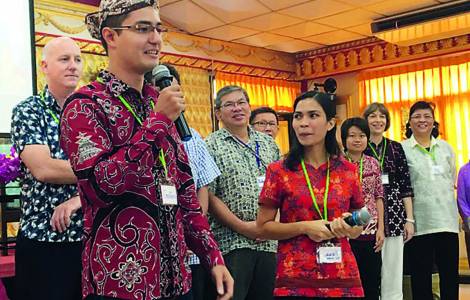 Bangkok (Agenzia Fides) - Catholics in Thailand are looking forward to Pope Francis' visit to the Country. Pope Francis will make a three-day visit to Thailand in November, ahead of an already announced trip to Japan from 23 to 26 November.
"At the invitation of the Royal Thai Government and the Bishops of Thailand, His Holiness Pope Francis will make the Apostolic Visit to the Kingdom of Thailand from 20 to 23 November 2019. The programme of the visit will be announced later", President Cardinal Francis-Xavier Kriengsak Kovithavanij, President of the Bishops' Conference of Thailand said at a video press conference.
According to the bishops' note, the Pope will celebrate two public Holy Masses, one for Thai Catholics and one for Catholic youth and will also visit Catholic communities in Thailand. Mgr. Wissanu Thanya-anan, deputy secretary-general of the Conference, said the Masses might be held at stadiums as a large number of Catholics are expected to attend. Pope Francis might also meet the Supreme Patriarch of Thailand, the new king of the nation, His Majesty King Maha Vajiralongkorn, he added.
" Pope Francis is pleased to visit Thailand as a pilgrim of peace and to promote inter-religious dialogue", said Archbishop Paul Tschang In-Nam, apostolic nuncio to Thailand.
The visit to Thailand will coincide with the 350th anniversary of the founding of the "Mission de Siam" by Pope Clement IX, in 1669 to oversee Catholic missionary work in the country. On that occasion the Catholic faith was definitively rooted in Thailand. Furthermore, the same year saw the celebration of the 50th anniversary of the establishment of diplomatic relations between the Kingdom of Thailand and the Holy See in 1969. Finally, we also recall the 35th anniversary of a Pope's last visit to Thailand, by Pope John Paul II in 1984.
The Catholic faith was first introduced in Siam (the ancient name of Thailand) by Dominican missionaries in 1567 during the period in which Ayutthaya was still the capital. A mission was officially established during the papacy of Pope Clement IX on June 4, 1669. Since then, the missionaries also worked for the development of the population, engaging in many social works.
"The Thai people are grateful to the Holy Father for this upcoming visit: we look forward to seeing him as the bearer of a message of peace", says lay leader Catherine Mala to Fides.
Another Catholic, Christopher Angsakul, says: "It is a great opportunity for all of us to receive the Holy Father. The young people are enthusiastic about his arrival, we will welcome him with an open heart, ready to interact with him".
Today, according to data provided to Fides by the Social Communications Office of the Bishops' Conference, the Catholic minority accounts for 0.58% of Thailand's population, (69 million inhabitants mostly Buddhist) with 388,468 devotees, 524 churches, 436 parishes and 662 priests. (SD) (Agenzia Fides, 25/9/2019)