AMERICA/BRAZIL - The "Caminhada pela Paz" in Manaus recalls the 10 years of the assassination of Fr. Ruggero Ruvoletto 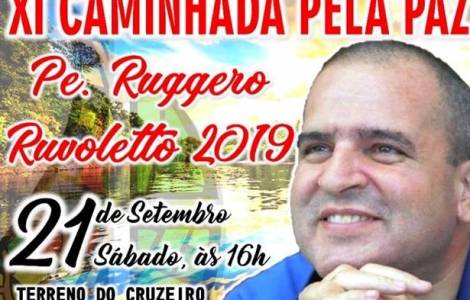 2020-06-01
"Tempo de Cuidar": aid campaign for the most vulnerable people during the Covid-19 crisis

2020-05-27
The pandemic does not cancel the mission: the PMS confirm the campaign for missionary October

2020-05-04
Bishops reaffirm "the defense of democracy, for justice and for peace" in times of health crisis

Manaus (Agenzia Fides) – Fr. Ruggero Ruvoletto, a 52-year-old Italian Fidei donum missionary, was killed around 7 am (local time) on Saturday 19 September 2009, in his parish dedicated to the "Sagrado Corazon de Maria" in the barrio Santa Etelvina, a suburb of the Amazon capital of Manaus (Brazil) (see Fides, 21/09/2009).
"Fr. Ruggero was killed in his room inside the rectory for having denounced drug trafficking and the lack of public security, problems that afflict the community - recalls the statement of the Archdiocese of Manaus sent to Agenzia Fides -. Today the place of his martyrdom has become a chapel. The liturgical vestments he used were placed in a glass bell, on display in this place".
"To honor him - continues the statement of the Archdiocese -, the community organizes the Caminhada pela Paz every year. The 2019 edition has the theme 'When the blood of an innocent is shed, God cries!' and the theme 'Mission in the Amazon: a cry for life and for peace!'. "The march will take place on Saturday 21 September, with the meeting at 4.00 pm in Terra do Cruzeiro, avenida 7 de Maio. From here we will head towards the church of Santo Antônio, recalling the importance of the Synod for the Amazon, and the themes of mission and vocation, evangelization, life and peace. The event will end with a Mass presided by the Auxiliary Bishop of Manaus, Bishop José Albuquerque.
The memory of Fr. Ruggero is always alive even in his Diocese of origin, Padua. On the occasion of the tenth anniversary of his death, the Bishop of Padua, Mgr. Claudio Cipolla, presided over a Mass in the cemetery of Vigonovo (Ve). On Saturday 26 October, at 8.30 pm, in the church of Galta, his native town, a concert-event will be held in his memory, with testimonies and readings on the Amazon.
Fr. Ruggero Ruvoletto was born in Galta di Vigonovo on March 23, 1957, in the province of Venice, diocese of Padua. He was ordained a priest in 1982. After studying ecclesiology in Rome, he returned to the diocese in August 1994, where he worked for about a year in social and pastoral work, and was then appointed Director of the Diocesan Missionary Center, a post he held from 1995 to 2003. On 6 July 2003 he left for Brazil, as a fidei donum missionary, in the Diocese of Itaguaì in Mangaratiba. The following year he took part in a missionary presence project on the outskirts of Manaus, wanted by the local dioceses. A border area between the city and the forest where crime is particularly aggressive. (SL) (Agenzia Fides, 20/9/2019)

AFRICA/NIGERIA - "He continued preaching the Gospel and asking me to change the evil ways, that is why I killed him", says the murderer of the young seminarian