AMERICA/BOLIVIA - "March of faith for Chiquitania": solidarity and prayer to defend the common home 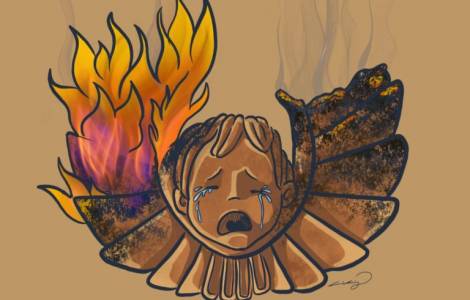 2020-06-03
"Volunteer soldiers of God": a religious shares the fight against the coronavirus in Beni area

2020-05-14
"We must know if this government is interested in life", asks Mgr. Centellas on Journalist's Day

2020-05-06
The Bishops: a new date for the elections so as not to endanger the health and life of Bolivians

Santa Cruz (Agenzia Fides) - "We do not own this earth, we are administrators of it and, therefore, we are called to guard and defend the earth, and we do so according to our faith, which is why we invite everyone to the 'March of Faith for Chiquitania', next Friday, 20 September, at 6.30 pm. The 'March of faith' is an initiative of solidarity and prayer to defend our common home", said Archbishop of Santa Cruz, Mgr. Sergio Gualberti, encouraging everyone to participate in this initiative.
The area of Chiquitania (Santa Cruz) in Bolivia was one of the most affected by the fires in the last two months (see Fides, 13/9/2019). Unfortunately "there are serious indications that behind this national and humanitarian disaster there is a decision to expand the agricultural frontier in Bolivia without taking into account the interests of the common home, nor the basic principles of ecological ethics, nor of indigenous peoples", stated Bishops’ text published on 11 September.
In his speech during yesterday's press conference, Archbishop Sergio Gualberti said that there is great concern: "We have heard the cry of the people of God, for these disastrous fires and the great consequences at an ecological level, and many other problems it is causing. This is why, as Christians, we cannot remain indifferent, we want to contribute with our voice, with our presence and what distinguishes us is the faith of the God of Life, in the God of creation, who wants a balance with all creation, wants human beings to take care of that gift he gave us".
The initiative of the March is not exclusively of Catholics, in fact during the press conference besides the Archbishop of Santa Cruz, there were also, as a sign of communion and brotherhood, also representatives of ecumenical Churches: Pastor Jorge Wills, of the Evangelical Methodist Church in Bolivia ; Father Hedra El Anba Boula, of the Coptic Orthodox Church; Leidy Muñoz, of the Central Committee of Mennonites, the religious María Susana Guzmán, episcopal delegate responsible for the education of Santa Cruz and Sister Mónica Canedo, of the Bolivian religious conference, along with Father Hugo Ara, vicar of Communication of Archdiocese.
A first report from the authorities of Santa Cruz informs that in Bolivia fires have destroyed 2 million hectares of land, of which 900,000 in protected areas. The material losses of the population have not yet been quantified, with an impressive number of dead animals burned in this area of Bolivia. (CE) (Agenzia Fides, 19/9/2019)