AMERICA - The Permanent Observer of the Holy See to the OAS, a contribution to dialogue and peace 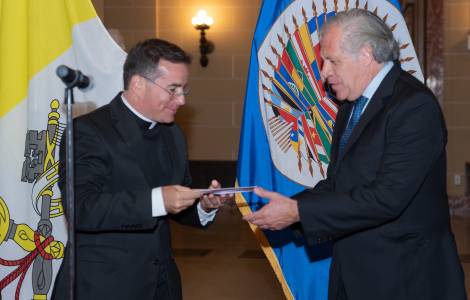 2020-05-14
Bishops of the continent participate in the "Day of prayer, fasting and works of charity" to invoke the end of the pandemic

2020-05-07
Urgent dissemination of necessary minimum information on Covid-19 among the indigenous peoples of the Amazon, initiatives of Christian groups

2020-04-01
On Easter Sunday the consecration of Latin America to Our Lady of Guadalupe, to invoke the end of the pandemic

2020-03-26
A map to reach the Amazon in a realistic way, where poverty and inequalities favor Covid 19

Washington (Agenzia Fides) - The Organization of American States, OAS, will have a new Permanent Observer, from the Vatican, Mgr. Mark Gerald Miles, who on Monday presented his credentials to Secretary-General Luis Almagro, in a ceremony that formalized the appointment by the Vatican State.
The Vatican State has been a Permanent Observer of the OAS since 1978. With this decision the Vatican joins Spain, Italy and France as countries with ambassadors assigned exclusively to the OAS, as reported in the note sent by this organization to Agenzia Fides.
"With this appointment, His Holiness has wanted this permanent mission to be even more constant and close to the OAS, being exclusively dedicated to the work of this illustrious Organization", said Mgr. Miles. "In addition, in the context of the primary objectives of the OAS, which the Holy See shares, and from which it wants to offer its full contribution, this Mission wishes to learn from the experiences of this headquarters, as well as from the member States", added Mgr. Miles when presenting the credential that accredit him to the hemispheric entity.
"The decision of His Holiness Pope Francis to have an office for the OAS is proof of the importance he places on the countries of the Americas, in general, and his proximity to this Organization, in particular", said Secretary General Almagro, who recalled that the OAS has carried out with Pope Francis the Interreligious Dialogue initiative "uniting the practitioners of the Catholic faith with the practitioners of Judaism and Islam in order to promote peace and tolerance in our common home, the earth". "We trust that with your permanent presence we can work together in the defense of the common values shared by the Vatican and the OAS", concluded the Secretary General.
Mgr. Mark Gerard Miles, appointed Permanent Observer of the Holy See to the Organization of American States (OSA), was born in Gibraltar (Great Britain) on May 13, 1967. He was ordained a priest on September 14, 1996. With a degree in Canon Law, he entered the Holy See’s Diplomatic Service on July 1, 2003. He has worked in the Papal Representations in Ecuador and Hungary and in the General Affairs Section of the Secretariat of State. (CE) (Agenzia Fides, 17/9/2019)

AFRICA/IVORY COAST - The Bishops express their condolences to the Muslim community following the death of Cheick Aimah Boikary Fofana, a great figure in interreligious dialogue