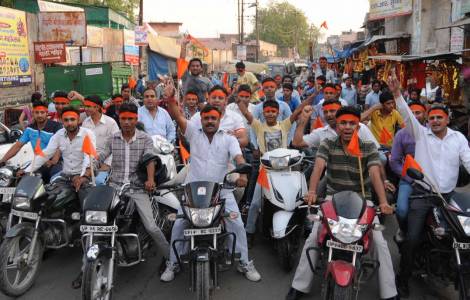 New Delhi (Agenzia Fides) - A crowd of 500 militant Hindu extremists devastated a Jesuit College in the eastern Indian state of Jharkhand. This is what Jesuit Fr. Thomas Kuzhively, Secretary of the College, reported to Agenzia Fides. According to the reconstruction of the religious, the attack took place on September 3: "One week after the attacks, the St. John Berchmans Inter College, in Mundli Tinpahar, 38 km south of Sahibganj, one of the main cities of Jharkhand, remains closed because everything is damaged. No action has yet been taken by the police or the state government".
As Fr. Thomas reports, the punitive expedition took place after a quarrel among students. The priest reported that the crowd came to the campus with weapons: sticks, chains, iron bars, knives and pistols and beat the tribal boys of the Loyola Adivasi hostel. Two boys were seriously injured and their lives were saved by the timely intervention of sisters in service at the College. Although an ambulance was called, the crowd did not allow the wounded to be taken to the hospital. "Later, the police took them to Rajmahal hospital", he added.
The crowd also tried to sexually harass college girls and female staff, says Fr. Kuzhively. Jesuit Father Nobor Bilung tried to talk to the crowd, but he was hit in the head. "The headmaster and the entire administration staff were helplessly shocked. None of their efforts managed to calm the crowd", notes the Jesuit.
The militants broke all the window panes, damaged the exhaust pipes, the furnishings, the electrical systems and the audio system. After devastating the boarding school, the crowd went to the hostel building and there too they committed acts of vandalism in the building. The attackers also took away the cash held in the office drawers and three cell phones for the common use of the hostel boys.
Three nuns bravely remained standing in front of the hostel gate to resist the crowd's attempt to climb the stairs where about 200 students were hiding.
Police officers arrived at the site and found the damage and tried to stop the attackers. The crowd of militants also threw stones at the police, injuring some. After four hours of chaos, the crowd dispersed.
The College has filed a complaint that mentions the names of 26 students who led the crowd, estimating the damage at 1.5 million rupees. "We ask for concrete measures to be taken", the religious adds, reporting that the college authorities have sent appeals to the judicial authorities, the governor and prime minister of the state of Jharkhand, the president of the national commission for human rights and the president of the National Commission for Minorities, calling for immediate action against aggressors. Schools in the region are planning a special strike to protest against the attack. (SD) (Agenzia Fides, 12/9/2019)

ASIA/PHILIPPINES - Bishops to the faithful, put to the test by the pandemic: "Let's not lose hope. The crisis can bring out the best in us"