AFRICA/SOUTH AFRICA - Feminicides: "May God free men from the belief that we possess women", says His Exc. Mgr. Phalana 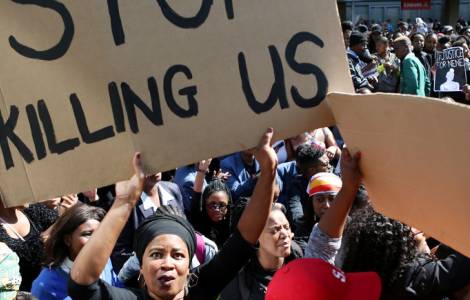 2019-09-13
Xenophobia: stance taken by the Bishops of Southern Africa

Johannesburg (Agenzia Fides) - While the wave of violence against Nigerian migrants does not stop (see Fides, 5/9/2019), South African society is confronted with another form of widespread violence: that against women. Last week hundreds of people took part in a demonstration to protest against the "feminicide epidemic" in Cape Town.
The demonstration was promoted following two brutal murders that caused outrage and dismay in the Country. In the first case, on August 24th, a student from Cape Town University, Uyinene "Nene" Mrwetyana, 19, was raped and killed in a post office. On August 30, boxing champion Leighandre "Baby Lee" Jegels, 25, was shot dead by her partner, a police officer.
According to official data, at least 137 sex crimes are committed every day in South Africa, mainly against women. The Minister of Women, Maite Nkoana-Mashabane, said that in August alone, more than 30 women were killed by their spouses. More than 3,000 women were killed in 2018.
A drama that does not leave the Church indifferent. "I want to shout against gender-based violence. Let this cry be read in the parishes, in Catholic families, in catechism classes, in youth groups, among groups of men and women", said His Exc. Mgr. Victor Hlolo Phalana, Bishop of Klerksdorp, on the columns of the Catholic newspaper The Southern Cross. Mgr. Phalana called on women to "stand up and fight for their rights and to refuse to be threatened and intimidated. Let those who threaten you be arrested and brought to justice. Do not shut up, report bullies and stalkers, because you have your rights. No one has the right to abuse you. No one has the right to force you into intimacy with him".
"May God free men from the belief that we own women and that they are our property. May God free men from the spirit of jealousy and possessiveness. May God free men from the spirit of control: the need to control women and their finances, their dreams, their resources and their value", concluded Mgr. Phalana. (L.M.) (Agenzia Fides, 10/9/2019)

AFRICA/IVORY COAST - Diocesan pilgrimage: women of the Catholic Church join forces to pray for peace in the Country