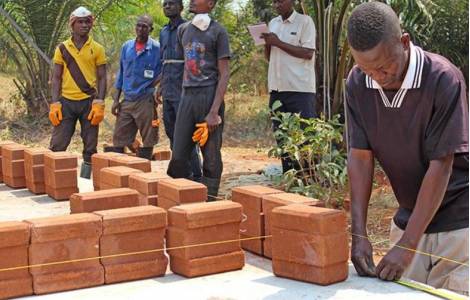 Bangui (Agenzia Fides) - Creating jobs in Africa, giving birth to small entrepreneurial experiences, giving opportunities to men and women who live in a country at the top of the poverty ladder: is the commitment of the Discalced Carmelite religious working in Bangui, capital of the Central African Republic. "The serious poverty of the population has led us to believe that an intervention in the field of training and development is necessary, even more so in these times when the Country is trying to return to normal, after years of bloody war", reports in an interview with Agenzia Fides Fr. Jerome Paluku, Secretary for the Missionary Cooperation of the Discalced Carmelite Order.
The members of the congregation founded by Saint Teresa of Jesus and Saint John of the Cross, in fact, lived with the suffering and the discomfort of the displaced: currently their mission in Bangui, welcomes 3,000 refugees against the 10 thousand hosted in 2014 when the refectory became a delivery room and the children slept in the church. "Many refugees - says Father Jerome - have managed to return to their homes or rebuild one elsewhere. There are about 7,000 people who spent a few weeks, a few months, or even one, two or three years at Carmel". Many projects have been carried out in recent years by the Carmelites in support of the less fortunate: among the most important, there is the “Carmel” Agro-Food Training and Production Center, which is based in the capital, and was funded in 2017 thanks to the 8 per thousand funds of the Italian Bishops' Conference (CEI) and with the contribution of a French association founded by two missionaries in Cameroon.
"The project - explains Father Paluku - has already successfully started producing clay, sand, cement and water self-locking bricks. Many former refugees are now workers and masons. There is also an agricultural school where agro-food training will be offered. Then a cattle farm with 75 head of cattle, the only one in the capital and one of the best in the Country, and a series of wells".
Furthermore, a scholarship assignment project continues, because - explains the secretary - "it is important to insist on the importance of investing in education: the formation of young people remains our first mission in the young heart of Africa and the Church".
"According to a UN report - the religious continues - as many as 10,000 children in the inner area cannot go to their classroom because their classrooms are occupied by rebels". The situation in the Country is, in fact, still precarious: "In the capital, in the last two months, there have been no serious clashes, however - notes the Carmelite priest - it is no longer a clash between two fronts, the Seleka and the anti-Balaka".
Fr. Paluku notes: "Peace agreements have not been effective and the State is not able to guarantee security". Now everything is in the hands of the 12 thousand UN soldiers: "There have been demonstrations of protest on behalf of the population to demand the establishment of a national army, non-existent for three years now", he explains. "Without the UN - he continues - the situation would be worse, also because an efficient and reliable army cannot be created in a short space of time. It will take time for the situation to stabilize. It takes very little to start a war, but for peace it takes time, patience and courage". (ES) (Agenzia Fides, 7/9/2019)

AMERICA/MEXICO - The 44th edition of CLAEM is underway