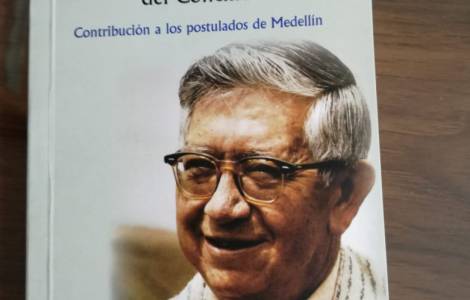 Quito (Agenzia Fides) - A few days before the 31st anniversary of the death of Mgr. Leonidas Proaño, celebrated in various cities of the country, the Catholic community asks to seriously consider the indigenous reality in Ecuador. Mgr. Proaño was for more than 30 years Bishop of Riobamba, loved by the poor and persecuted by the powerful. "Taita Leónidas" was imprisoned by the dictatorship of Guillermo Rodríguez Lara and was even accused of being a guerrilla, an accusation that later proved to be false, and was acquitted by Pope St. Paul VI. Mgr. Proaño always defended the need to educate in the language of indigenous peoples, which is a necessity today. He taught what commitment meant and what the prophetic vision was, in denouncing the liberation of the most oppressed among the oppressed, who were the natives of Ecuador.
Today, according to a note sent to Fides by Signis, among the celebrations in his memory and of his inheritance, there is the request to declare the "Indigenous Missionary Formation Center" a historical cultural heritage of Ecuador. "This will allow its spaces to be protected, so that they are not compromised by urbanization", explains Ayala Mora, president of the "Monseñor Leonidas Proaño" National Committee.
The "Indigenous Missionary Formation Center" is located in Pucahuaico, on the land that Mgr. Leonidas Proaño purchased with the money received when he was nominated for the Nobel Peace Prize in the 1980s. The Center has become a place for the meeting and coexistence of young indigenous people in search of a community life and the study of the Word of God, as women and as indigenous. This required a knowledge of indigenous culture and the historical roots of the native peoples. Through these paths we came to the definition of an indigenous spirituality with all the richness of its cosmic, communal and permanent relationship with God.
Yesterday in Quito, a hundred indigenous Waorani protested against the entry of oil companies in areas inhabited by that ethnic group, who is conducting a judicial battle to ban the extraction of crude oil in the Ecuadorian Amazon. With about 4,800 members, the Waorani possess about 800,000 hectares of forest in the provinces of Pastaza, Napo and Orellana. The law recognizes the indigenous jurisdiction in the territory, but maintains the power of the State on the subsoil. In continuing the legal conflict, the Waorani people informed that they wanted to involve international organizations.
Mgr. Proaño died on 31 August 1988, leaving a rich legacy to the local Church: the Centro de Estudios y Acción Social (CEAS), where the leaders of peasant organizations are trained; the Ecuadorian Popular Radio Schools (ERPE) for adult literacy and education; the Hogar Santa Cruz, a center of community life and technical updating; the Diocesan Missionary Team, missionary groups involved in the social sector, an initiative that is also proposed in other dioceses (see Fides, 29/1/2015). (CE) (Agenzia Fides, 6/9/2019)

AMERICA/ST VINCENT AND THE GRENADINES - First mission opened in Belle Vue: the work of the Redemptorists celebrates its first year