EUROPE/SPAIN - Archbishop Dal Toso at the Compostelan Days of Theology: "this world still needs the salvation of Christ" 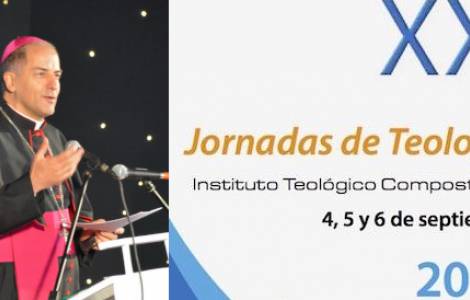 2019-11-16
"The «portico» of the Church of Pope Francis": Cardinal Filoni at the San Damaso University

2019-10-17
"With you, Luigi, we suffer, we pray and we hope": the missionaries recall and wait for Father Maccalli

2019-09-04
Archbishop Dal Toso at the Compostelan Days of Theology: "this world still needs the salvation of Christ"

Santiago de Compostela (Agenzia Fides) - "From the Maximum illud to the Extraordinary Missionary Month" is the theme of the report that Archbishop Giampietro Dal Toso, President of the Pontifical Mission Societies, presented this morning at the opening of the 20th edition of Theology Days, on the theme of mission, which are held from today to 6 September at the Compostelan Theological Institute.
In his extensive speech in Santiago de Compostela, the Archbishop illustrated the antecedents of the Extraordinary Missionary Month, from the announcement given by Pope Francis to the Angelus of World Mission Sunday 2017 to the next steps, therefore he paused to reflect on the Maximum illud and on the actuality of the Church's mission in the world, indicating some specific objectives of the Extraordinary Missionary Month, "which presents itself as a means for the renewal of the missionary spirit in all the faithful and in the whole Church".
"Maximum illud offers more than sufficient indications for the missionary conversion that Pope Francis proposes us - underlined Mgr. Dal Toso -. I believe that the Extraordinary Missionary Month is a wonderful opportunity to become aware of the need to have a spirit of universal Christian charity. In the same way that Maximum illud has changed the way of understanding and carrying out the mission in the Church, the Extraordinary Missionary Month should help the missionary pastoral care of the Church and take a new direction".
In particular, in fulfilling the missionary mandate we must not forget he who sends, the risen Christ himself, by the action of his Spirit. "There is a danger - reiterated Mgr. Dal Toso - of being tempted to carry out the mission without taking into account the one who sends us, and that the Risen One who sends us also tells us: 'I am with you every day, until the end of world' (Mt 28,20) ... A new evangelical imprint in missionary pastoral care can only come from placing the kerygma more clearly at its center. The Maximum illud proposed abandoning trust in human powers (the colonial powers at that time) for the effectiveness of evangelization; also today we must believe in the efficacy of the power of God that has been given to us by the announcement of the dead and risen Christ, and that still has the strength to touch the hearts of men and let them know the love of God. This is the foundation of mission and missionary pastoral care".
The Maximum illud marked a change of epoch, no longer considering Europe the center of the world: it is what we still live in our days, made evident by the globalization that has widened the horizons. Even in the Church the most recently evangelized communities appear with greater strength and quality: "They are the fruit of all these years of proclaiming the Gospel. Today, among the various local Churches, a movement of giving and receiving is increasingly established, thanks to which we can live in a more conscious way the universality of our faith".
The Archbishop then underlined that the historical task of the Churches in Europe has certainly not been exhausted, above all in providing theological and formative resources, and concluded his report with a wish: "At the end of the nineteenth century the missionary fervor of the people of God made possible a great missionary work in the Far East, of which one of the most visible fruits is the Maximum illud. At the beginning of the 21st century, God is asking us to nourish this missionary fervor, so that the universal mission of the Church continues in this world, which still needs the salvation of Christ". (SL) (Agenzia Fides, 4/9/2019)

EUROPE/POLAND - Archbishop Dal Toso at the PMS of Poland: thanks for your generous daily missionary commitment