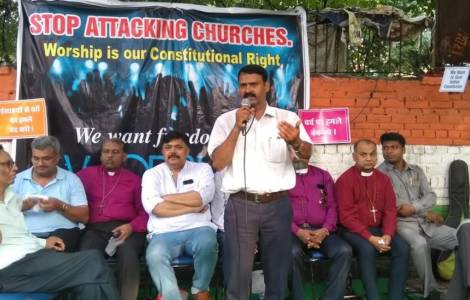 New Delhi (Agenzia Fides) - "Christians are victims of violence in India. We are fighting for our fundamental rights: the right to worship and religious freedom as citizens of this country. Therefore we are here to protest against all forms of violence, persecution, injustice and discrimination perpetuated on Christians and churches": says Christian Minakshi Singh, activist for human rights, organizer of a demonstration that, in New Delhi, gathered hundreds of faithful of different denominations to protest the growing violence.
According to the United Christian Forum, in the first six months of 2019 there were 158 episodes of violence against Christians in 23 Indian states, in which 110 women and 89 children were also injured. Among the attacks, 130 concern attacks or intimidation and threats by violent groups that beat the faithful peacefully gathered in church or in prayer rooms. "This means that "practicing one's faith is becoming a cause of insecurity in 90 percent of the Indian territory", the Forum wrote.
"Some groups and people want us to stop praying in our churches and accuse us of proselytizing or wanting to convert others. This is a totally wrong and false accusation", said Minakshi Singh. "The right to go to church and celebrate our liturgies is our constitutionally established right. Some people want to divide India on a religious basis. This is neither possible nor fair in a democratic country", the activist added, who organized the gathering held in New Delhi on 31 August.
Those present highlighted that Prime Minister Narendra Modi has just started his second term after leading his pro-Hindu party Bharatiya Janata (BJP), after winning the May general election in India and under his Government mandate, reports of violence against Christians have grown because the climate of intolerance, encouraged by politics, turns into open violence. Christians, the activist said, "are facing a new wave of threats from extremist groups, since the BJP confirmed its power last May".
"We are fighting for our rights. In November, we will organize a massive demonstration against religious violence. The federal government must stop these shameful accusations against Christians", said to Fides Himanshu Aggarwal, another organizer.
The protesters also sent a letter addressed to Amit Shah, Minister of the Interior in the federal government, calling his attention to episodes of persecution against churches and Christians throughout the country.
"Violence and acts of intolerance against Christians are rampant in the country. Christians feel increasingly insecure and their fundamental rights, including the right to choose a church and profess a faith of their choice, are trampled on day by day", reads the letter. The text reads that it is the task of the Minister of the Interior to protect Christians, said Aditya Masih, a speaker at the demonstration. (SD) (Agenzia Fides, 3/9/2019)

AFRICA/NIGERIA - The continuous desecrations force the closure of a church