AMERICA/MEXICO - Bishops: it is urgent to stop violence against women 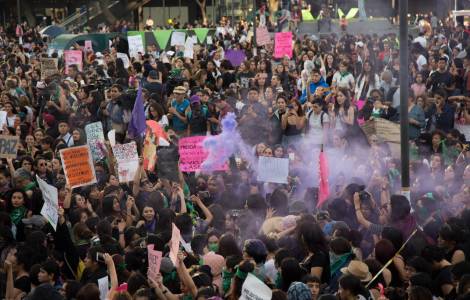 Mexico City (Agenzia Fides) - It is urgent to stop all actions that undermine the dignity of women in Mexico: this is the appeal launched by the Archbishop of Puebla, Mgr. Víctor Sánchez Espinosa, who once again highlighted the peak of violence that is recorded against women in the country. Speaking at a conference to publicize the 375th anniversary of the Palafoxian seminar, the Catholic leader said that "the recent protests by women, accompanied by vandalism, are not the best way to express dissent", however, he said "everybody has the right to demonstrate, in this case women need further security in society".
"Women - the bishop said - cannot continue to be victims of rape, murder, violence and other crimes", and therefore urged all sectors of society to "fight the problem, because life is sacred and therefore must be protected. I ask to stop all forms of violent acts against women and against all human being", he concluded.
The issue of violence against women continues to hold strong. The "women's march", held last Friday in Mexico City, is perhaps the largest demonstration against violence against women in this country. In fact, Mexican women took to the streets to demand respect and stop the sexual violence and insecurity they suffer in Mexico. Unfortunately, part of the demonstrators committed vandalism in public spaces such as squares, subway stations or sidewalks in Mexico City.
According to the Mexican press, which closely monitors the issue of violence against women, considering the numbers of cases of harassment, abuse and femicide, Mexico is one of the riskiest in Latin America with regards to the safety of women.
"Almost three women are killed a day, in addition, at least 49 are sexually abused, creating an alarming situation for the number of people affected", reads a note sent to Agenzia Fides.
According to data released by the Mexican mass media, during the first six months of the year, deaths reached the record of 470 women, 111 of whom were killed with a firearm, 99 with a cutting weapon, 261 with another type of object. Among the cases reported, there are sexual crimes: the figures reach 1,530 cases of sexual abuse reported in a single month, with an average statistic of 51 women sexually assaulted every day, without considering the victims that do not report the violence suffered or all those who remain silent for fear of reprisals.
As reported to Fides, two other bishops, Mgr. Benjamín Castillo Plascencia of the Diocese of Celaya, and Mgr. Enrique Díaz Díaz, of Irapuato, publicly expressed their concerns by solemnly declaring the urgency of adequate measures to stop the violence against women in Mexican society. (CE) (Agenzia Fides, 20/08/2019)

AFRICA/NIGERIA - "Rape is repulsive, reprehensible and dehumanizing" says Mgr. Kaigama in the face of the increase in sexual crimes