EUROPE/POLAND - Cardinal Filoni at the shrine of Zakopane: "Mary is present and alive among us" 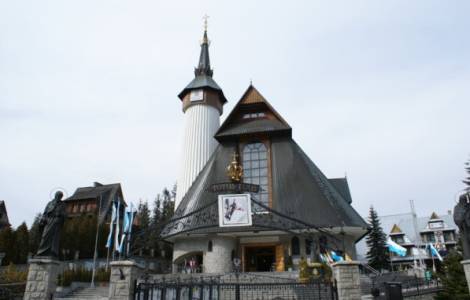 2020-02-20
From the Extraordinary Missionary Month to the Synod of children: meeting of the PMS National Council

Zakopane (Agenzia Fides) - "One wonders: why so many Shrines in the world, why so much affection and devotion to Mary? In truth, from the moment Mary lost Jesus, she adopted, as Mother, the Church born of the blood of her Son, becoming herself a first and elected member, which means that, wherever there is a community of faith, like the first community of the Apostles, Mary is there, finds a home and family where to live. This also explains why Mary has never left us alone. Her apparitions, such as Fatima, Lourdes, and many others, her shrines such as Częstochowa, Zakopane, and many others scattered throughout the various continents, bear witness to her living presence among us". This was underlined by Cardinal Fernando Filoni, Prefect of the Congregation for the Evangelization of Peoples, during the celebration of the Feast of the Assumption of the Blessed Virgin Mary, on August 15, at the National Shrine of Our Lady of Fatima in Zakopane, a city of 28 thousand inhabitants located in southern Poland, in the region called "Little Poland".
As Cardinal Filoni recalled, Karol Wojtyla often came to Zakopane, as a boy, then as a priest, often accompanying students. He returned several times even after he was elected Pope. The Marian Shrine was built here as an ex-voto for the salvation of Pope John Paul II’s life, after the attack on May 13, 1981.
The Prefect of the Congregation of "Propaganda Fide" said: "With joy we celebrate the liturgical solemnity of Mary. Assumed into Heaven in this National Shrine of Zakopane, where a house was built for Mary. All Christian Poland today is spiritually united to the priests and bishops in Jasna Gόra, in Czestochowa, where Mary is crowned queen of Poland. In the affection and devotion to Mary, generations of Poles have been formed and have kept their faith alive even in dark times. Mary, Karol Wojtyla, son of this nation, tempered his character and consecrated himself totally to her, Totus tuus, to Christ and to the Church".
In the homily of the celebration for the Assumption, the Cardinal continued: "The Church does not forget Mary, remembering and celebrating her liturgically throughout the liturgical year. Today the Church celebrates her in her mystery of Assumed into Heaven, because it was not possible that her body suffered the corruption of death, having been preserved from original sin. In this sense, Mary becomes the firstborn of a new creation, the one saved by Jesus.
We, as a Christian community, that is, as a community redeemed by Christ, are happy today to be gathered here and almost embraced and kissed by her and to be able to say: Mary, my Mother, I love you! I love you! If I close my eyes for a moment let me smell your perfume of woman and mother. Hold me tight as you held Jesus, talk to me as you spoke to him, look at me with the same tenderness".
The Marian shrine in Zakopane was built in 1987-1992 and the church was consecrated by John Paul II himself on 7 June 1997, during his sixth pilgrimage to his homeland. The Shrine was erected next to a chapel where, since the 1950s, Mary was worshiped and where in 1961 the image of the Lady of Fatima was placed, given by the bishop of Fatima to Cardinal Stefan Wyszyński, who he gave to the Pallotini Fathers, custodians of the chapel. It was the bishop of Krakow of that time, Karol Wojtyla, who consecrated both the image and the chapel. In the so-called "Fatima Park", in the vicinity of the Shrine, there are also two monuments dedicated to John Paul II and the altar on which Pope Wojtyla celebrated Mass in Zakopane on June 6, 1997. (PA) (Agenzia Fides, 19/8/2019)

AMERICA/PARAGUAY - Feast of the Virgin of Caacupé: Mgr. Valenzuela complains about the violence and "the great absence of God in our life"

ASIA/PAKISTAN - Year of Youth in Pakistan: the Church presents the translation of the Bible in Urdu of the "Youcat" youth

ASIA/PHILIPPINES - Christians and Muslims deepen their faith: the initiative of the "Silsilah" movement