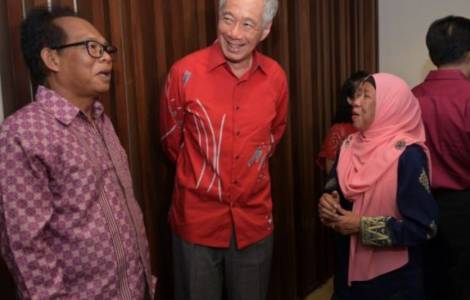 2020-02-15
Coronavirus: Masses and meetings suspended indefinitely in the Archdiocese of Singapore

2019-09-05
Protecting religious harmony: government and communities agree on changes to the law

2019-08-09
Archbishop William Goh's National Day message: "A new generation of leaders in society and in the Church is urgent"

2019-06-04
Podcast to announce the Gospel: an online Catholic radio is born

Singapore (Agenzia Fides) - "Singapore needs to raise up a new generation of leaders": this is stated by Archbishop William Goh on the occasion of the 54th Singapore National Day, which is celebrated on August 9th, to commemorate independence from Malaysia . In the message sent to Fides Agency, he says: "As we celebrate Singapore’s 54th National Day, we are called to give praise and thanks to God for guiding and protecting our nation all these years through her trials and challenges. However, we must not take our nation for granted, much less the peace, unity, harmony, security and prosperity we are enjoying", said Archbishop Goh.
Singapore is a city-state that gained independence from the Federation of Malaysia in 1965. Once a British colonial, today it is a thriving global financial center and is described as one of the economic "tigers" of Southeast Asia. It is also renowned for its fairly strict legislation and is proud of its stability and security. The city-state noted Mgr. Goh, "achieved this status through the sacrifices of our forefathers. Our Pioneer generation of leaders had laid the foundation for the growth of Singapore. The values are enshrined in our National Pledge, which is to commit ourselves as one united people, regardless of race, language or religion, to build a democratic society based on justice and equality, so as to achieve happiness, prosperity and progress for our nation". Those leaders have continued to build Singapore based on these values. As a result, Singapore today "has earned a place in the international arena for the amazing political and economic achievements and success", he said.
In his message, the Archbishop outlined the new challenges that the country is facing today: "The values of the world are changing rapidly, to the extent that those of us who belong to the Pioneer and Merdeka generation are bewildered at how much the values of society have evolved. From a world that placed religion at the centre of public life, it has become a world devoid of the presence of the Sacred". "From a stable world where perennial values of truth, love, fidelity, hard work, honesty, integrity, traditional understanding of marriage and family, the sacredness of life are accepted norms and traditions; we have now replaced these with moral relativism, a confusion of values, leading to pragmatism, individualism, materialism, despair and a culture of death, without any concern for the future of humanity and creation", he added.
"How can we respond as a community, as Catholic Singaporeans, to stand up for the eternal values of truth and justice, love and compassion so that we can collectively build a gracious society?", he asked. The Archbishop then invites all political, social or religious leaders to seek a way to build a nation where "the citizens of Singapore are united, given the diversity of views which are often irreconcilable".
"What is said of the political and corporate leadership - he observes - is equally true for the Church as well, in terms of grooming a new generation of leaders. Most of our priests currently belong to the Merdeka and Pioneer generations". The "Pioneer Generation" is that of those born before 1949, while the so-called "Merdeka generation "includes those born between 1950 and 1959: they are all those who lived the turbulent '60s in Singapore, during a period of struggles, difficulties and sacrifices.
"At present, older priests are being replaced with more and more migrant priests to help in our parishes because we have not enough local priests, and many of them are elderly. When there is no renewal in Church leadership, we will lose connection with the new generations. We are not addressing their aspirations and challenges in life in a way that they can understand, accept and be convicted. The Church is in the process of becoming an aged Church, redundant to society. We must not allow the Church to die because the future generations will then be raised in a godless society", he said.
The Archbishop hopes: "We need to promote priestly and religious vocations. But this is not as easy as before because the evangelical counsels, such as simplicity, poverty, obedience and chastity, are not appreciated by the new generations. The young generation is brought up in an affluent society that is individualistic, self-centered and promiscuous. Priestly and religious life are not attractive to our young people unless they have fallen in love with Jesus. Otherwise, priestly and religious life will be in danger of becoming another career option, an iron rice bowl for the lazy and complacent, a bachelor life of freedom, without commitment to selfless service of the gospel and the poor".
The message of Mgr. Goh concludes: "This is why, the Archdiocese must invest more of our funds to empower and form the faith of our younger generations, so that they will remain passionate for the gospel because they have encountered the love of Jesus in a radical and personal way". (SD) (Agenzia Fides, 9/8/2019)

AMERICA/MEXICO - The first element to work on today: the unity of all members of the Church