AFRICA / BURKINA FASO - Violence and terrorism, but the missionaries do not abandon the population 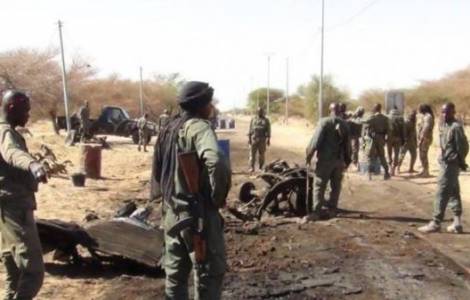 2020-11-09
Bishops on upcoming elections: "Differences of opinion must be understood as enrichment"

2020-09-08
The National Director of the PMS: "The recognition of the legal personality of the Church is a step forward for a fruitful collaboration"

Bobodiulasso (Agenzia Fides) - The alert in Burkina Faso where the situation is even more tense and dangerous than in Mali continues (see Fides, 11/6/2019).
Since last February there have been five attacks carried out in the same area by armed groups of jihadist origin, the last attack took place a few days ago in Diblou, a village in the north of the Country where at least 15 people were killed.
It is in this climate of tension that the Missionary Sisters of the Immaculate Conception, present in Burkina since 2000, operate.
"For the moment there are no great dangers here", the sisters assure in a note sent to Agenzia Fides.
"In Bobodiulasso, in the popular neighborhood of Quinimakora, we work closely with the parish and run two centers that belong to the diocese and are open to all. The population is relatively young and, also for this reason, we have opened a library with study rooms, an amphitheater for meetings, debates, conferences, cultural and educational activities".
"In fact, from the mother parish, three other parishes were born, organized in base communities, located in the various districts. We guarantee our presence with training sessions for adults, we go to visit patients at home. Our discussion meetings are focused on everyday problems such as lack of water, schooling for children, hygiene and literacy courses. In each district there is a management committee, plus a commission formed by a group of young people".
"In collaboration with an Italian pharmacist specialized in cosmetics, a cooperative was opened in 2005 where a dozen women were employed to work shea butter. They have learned to make cosmetics of remarkable quality both for the local market, and for export and are organizing themselves for trade abroad", continues the nun.
"For some years the community has welcomed young people who want to consecrate themselves to religious life. We have a postulancy and a novitiate, currently there are 6 novices in formation. An important point of formation is their integration in people's lives. The novices spend a month in the villages in groups, to share the daily life of the people they meet, living with the means they find on the spot and independently. Three times a week, they bring assistance to a mental health center. A nun maintains contact between the sick and families and a doctor supervises the Center".
According to a UN report published this week, about 224,000 displaced people have been forced to flee due to violence.
According to United Nations estimates, since the beginning of the 90s thousand Burkinabè people have fled their homes, they have left their villages because they are terrified of the violence that is being carried out in particular in the north of the Country. (LB/AP) (Agenzia Fides, 9/8/2019)

AMERICA/HAITI - Three days of prayer and fasting in all dioceses: "Let's give Haiti a chance!"

AFRICA/NIGERIA - At least 110 dead in Nigeria after suspected Boko Haram attack; there is still no news of a kidnapped priest