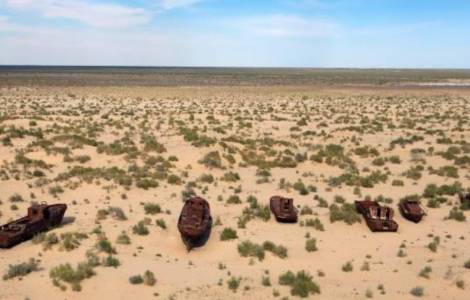 Astana (Agenzia Fides) - "I discovered Lake Aral when I was still a university student and in 1978, I started studying it. What I have understood in recent years is that the disaster created by human hands can be repaired by those same hands. My desire is to save all nations in the catchment area of this suffering lake, which has started to grow again, but only in the northern part. Today I am optimistic: if all the governments of the countries affected by the Aral Sea work together, we can receive funding from the World Bank and save other parts". This was stated in an interview with Agenzia Fides by Nikolai Vasil'evich Aladin, a professor at the Zoological Institute of the Russian Academy of Sciences, based in St. Petersburg, one of the world's leading scholars of environmental disaster of Lake Aral, between Kazakhstan and Uzbekistan.
Following the implementation of an intensive cotton cultivation plan, promoted by the Soviet Union since the 1960s, the lake, which in the past was the fourth largest on the planet, gradually emptied until it was reduced by 75% compared to the initial size. It is believed that the main cause of the disaster was the superficial and hasty construction of irrigation canals that caused the loss or evaporation of water: according to estimates, the Karakum channel, the largest in Central Asia, apparently wasted from 30% to 75% of the water that passed through it.
"The members of our lab are doing their best to ensure a better future for all the nations affected by the lake. We have done a good job for the 'Small Aral', a lake basin created in the North, following the gradual drainage, and now we should do everything possible for the central and southern parts", adds Professor Aladin.
To confirm the great work done are the words of Jens Thorvald Hoeg, associate professor of marine biology at the University of Copenhagen, who collaborates with the Russian researcher on the study of the lake: "In large part thanks to Professor Aladin, the northern part is improving for the benefit of the local population and the environment in general. This is due to the presence of the Korakal dam, built on the inspiration of Aladin's studies: thus it was possible to save the water. The serious problem today, however, remains the southern part. But even here there are plans for the recovery, reclamation and redirection of water. The projects are ready and the funding has been made available: with the support of governments and public opinion, all this can be achieved. We are confident, we hope and work hard to save lake Aral, for the benefit of future generations: its drying is the worst and perhaps least known environmental disaster of the twentieth century. But I am sure that it is possible to save the Aral".
The intensity of the efforts to recover lake Aral, does not always correspond to a particular attention towards the phenomenon of the Kazakh public opinion: the themes linked to the safeguarding of Creation are still not generally relevant. For this reason, the Catholic Church is pursuing paths to promote environmental protection on the planet. Fr. Guido Trezzani, the priest responsible for the national Caritas, explains to Agenzia Fides: "The question only began to emerge a few years ago, also thanks to the ambitions of the country to become a power equal to the Western ones. There are some initiatives, but they are still at an embryonic level, just as the awareness of these issues in people's daily lives is premature. One of the aspects on which we are working as Caritas is to enter educational and social environments with cultural proposals that feed the interest on the protection of the Common House, as proposed by the encyclical Laudato Sì of Pope Francis". Also during the Expo of Astana, held in 2017, the Catholic Church took the opportunity to reaffirm the importance of an attention to Creation. "All people are involved in the wise and careful use of energy: we must save it, apply it to worthy activities and not waste it. Those responsible for major decisions must ensure that the energy is wisely managed for the good of the whole human family", the Pontifical Council for Justice and Peace emphasized in the presentation document of the Vatican pavilion. (LF) (Agenzia Fides, 8/8/2019)

AMERICA/BRAZIL - Evangelization and communication: "Life is the best way to bear witness to the Gospel"

VATICAN - Cardinal Tagle at the PMS Assembly: "In the pandemic, the missionary spirit of every baptized person awakens"