VATICAN - Cardinal Filoni: "The new College in Macau, fruit of apostolic creativity and the desire to be a Church that goes forth" 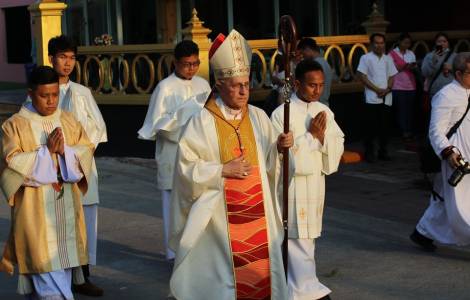 Vatican City (Agenzia Fides) - The new Redemptoris Mater College for Evangelization in Asia, based in Macao, is "the fruit of apostolic creativity that looks to evangelization in that continent and expresses a will of decentralization of the Congregation of Propaganda Fide": explains Cardinal Fernando Filoni, Prefect of the Congregation for the Evangelization of Peoples, in an interview with Agenzia Fides. The Cardinal recalls that in the history of the Church's mission "there have been so many forms and methods chosen for the proclamation of the Gospel in Asia: the historic commitment of the great religious orders such as Jesuits, Dominicans and Franciscans; the activity of many specific missionary institutes; the sending of fidei donum priests or interdiocesan missionary collaboration; the forms of missionary cooperation between the Churches of some nations or between metropolises. Now the Holy Spirit suggests a new form, which we will experience".

Eminence, what are the reasons that led the Congregation to take care of the opening of the new College?

We wanted to respond to the invitation of John Paul II who, at the beginning of the new millennium, said that Asia would be the vast continent to be evangelized. It is a very complex continent, cradle of great religions and very strong cultural responsiveness. The proclamation of the Gospel in Asia requires characteristics of its own, such as a thorough knowledge of different contexts and languages. The awareness of this complexity, however, does not exempt Christians from making the Good News alive and present. The Gospel is for everyone: thus Christ gave it to us, so we announce it today.
The Congregation of "Propaganda Fide", also at the request of the Neocatechumenal Way, wanted to reflect on how to make this appeal to evangelization in Asia their own. I would like to stress that the idea of establishing the Urban College in 1627, by Pope Urban VIII, was a precursor: it intended to bring young people from various continents to Rome for an adequate theological and spiritual formation, having acquired a good preparation, they could then contribute to evangelization in their territories of origin. The Urban College still exists today and has kept going for four centuries. Today, Pope Francis has resumed the intuition of John Paul II, pointing out that the Church is called to "go forth", to open up and not to withdraw in herself. Therefore, we thought that many Catholic institutions, even those in charge of formation and education, can be located in the various continents, thus operating in the sense of decentralization. With this spirit we wanted to create a College in Asia for the formation of priests destined for Asia.

Can you explain why it was entrusted to the Neocatechumenal Way and why Macao was chosen as the seat?

The Neocatechumenal Way became available and made available to the Congregation of "Propaganda Fide", which has the direct legal responsibility of the College, its long-standing experience of forming future priests for the mission in Asia. Thus the new College Redemptoris Mater was born, whose specific nature is to take care of the formation for missionary priests who will have the evangelization in the territories of Asia at heart.
Macao has historically represented the "door" or a bridge for the mission of the Church in the East. In past centuries it was a place of cultural and religious attraction, a territory governed by the Portuguese crown. Its importance is well known as a promoting center for evangelization in the Far East. Extraordinary missionaries like Matteo Ricci, Alessandro Valignano, Francesco Saverio and many other evangelizers passed through this "door" for the mission in Asia. Suffice it to say that in 1576, just erected, the diocese of Macao extended, at least on paper and for a certain time, to China, Japan, today's Vietnam and the Malay archipelago, as it was called. Macao became a great center of missionary formation and propulsion. Recalling this story, we asked the local Bishop, Stephen Lee Bun Sang, if he was available to host the new College and he, after consulting the priests of the diocese, confirmed the approval.
But the College, although based in Macao, does not depend on the local Bishop: appointments and authority remain the direct prerogative of "Propaganda Fide" which, according to the Second Vatican Council, has the task of promoting evangelization in the world. It is a first step: in this perspective of decentralization, it can be observed that it is not impossible that, tomorrow, other Colleges of this kind, promoted by the Congregation, on other continents, are born. It should be noted that our Congregation already has the responsibility of the Urban College, which welcomes 170 students from Asia and Africa in Rome. And there are other Seminaries connected with "Propaganda Fide" in the world, such as the Seminary of the Apostolic Vicariates in Colombia or several inter-diocesan seminaries in different countries. Today, the new College of Macao is the fruit of a special missionary initiative and method, which Pope Francis encouraged and approved. It should be noted, that future priests will become a precious pastoral aid for the local Churches: in fact, they do not belong to a given apostolic fraternity or a religious institute but, at the end of their journey of formation, they will be incardinated in the various dioceses of destination, according to the needs and requests of the Asian Bishops. And from now on they will be able to study the local languages and cultures of the countries in which, in agreement with the authorities of the College, they will be destined for the pastoral and apostolic service.

What are your wishes and hopes for the life of this new College?

We are happy to promote an institution with new characteristics, which responds to the desire and that missionary vision of Pope Francis which is a founding and qualifying point of his pontificate. We intend to respond to Christ's call to announce the Gospel to the ends of the earth. In the history of the Church's mission, there have been so many forms and methods chosen for the proclamation of the Gospel in Asia: the historic commitment of the great religious orders such as Jesuits, Dominicans and Franciscans; the activity of many specific missionary institutes; the sending of fidei donum priests or interdiocesan missionary collaboration; the forms of missionary cooperation between the Churches of some nations or between metropolises. Now the Holy Spirit suggests a new form, the fruit of apostolic creativity, which we will experience. We entrust this work to the hands of Mary, Mother of the Redeemer, and to Saint Joseph, Custos of the Holy Family of Nazareth. And we ask for the intercession of the saints and martyrs who gave their lives for the spread of the Gospel in Asia. (PA) (Agenzia Fides, 29/7/2019)