AFRICA/BURUNDI - When fraternity in Christ is more important than an ethnic group: the testimony of the Burundian martyrs 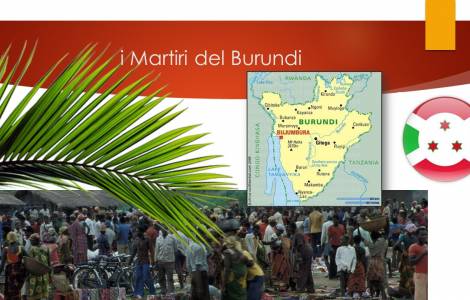 2021-01-05
Mission as the central point of priestly formation

2020-06-20
"President, give us peace among Burundians": Archbishop of Gitega at the inauguration of the newly-elected Head of State

2020-06-10
Did Covid-19, whose incidence is minimized by the authorities, cause the President to die?

2020-06-08
Presidential vote; the Bishops: "We have not appealed to the Constitutional Court"

2020-05-27
Elections: "Voting took place in a peaceful manner, but we have found several irregularities", say the Bishops

Bururi (Agenzia Fides) - "The Church that is in Burundi through us, Bishops, wants to celebrate a group of people who, in the name of Jesus, offered their lives to show that our fraternity in Christ is more important than belonging to an ethnic group. It is a great testimony, a message that we believe is truly necessary for all Christians. We therefore want to celebrate Christian fraternity". The Bishops of Burundi greeted the opening of the diocesan phase of the Canonization Process, celebrated on June 21 in the Cathedral of Bururi, concerning two Italian Xaverian missionaries and one volunteer, killed in Buyngero in 1995, a Burundian priest killed in Gitega in 1972, and 40 seminarians from the minor seminary in Buta, killed in 1997. This is the first Cause of canonization that opens in Burundi.
"These brothers and this sister in Christ are the heroes that we, the Bishops of Burundi, present to you as a single model that inspires love for fraternity - continues the statement sent to Fides -. They represent the first group of probable martyrs that we present to the universal Church, to be officially declared martyrs and are for us all models of fraternity in Christian life and also in our whole Burundian society. We invite you to follow the different phases of the Process in prayer and joy. We know many other brothers and sisters of Burundi who offered their lives in the name of inter-ethnic fraternity and we are sure that there will be other processes of canonization on martyrdom after the diocesan Process we are beginning".
The beatification super martirio cause was promoted by Xaverian missionaries (Pious Society of Saint Francis Xavier for foreign missions), the institute founded by San Guido M. Conforti to which Fr. Ottorino Maule and Fr. Aldo Marchiol belonged. Also lay volunteer Catina Gubert was killed.
The Bishops’ Conference of Burundi gave its full support. Meanwhile, the Congregation for the Causes of Saints suggested to include Abbé Michel Kayoya, who was killed in Gitega on May 17, 1972, and the forty seminarians killed on April 30, 1997 in the seminary in Buta, in the process.
Abbé Michel Kayoya, 38, was killed in Gitega on 17 May 1972. Priest, poet and philosopher, through his publications he always emphasized that ethnic differences more than being a threat are a wealth, a mutual gift. Charismatic figure, lover of truth, preached love without ever separating it from justice. He was arrested by an armed gang and imprisoned along with about fifty priests and lay people.
At 5 am on 30 April 1997 a gang of rebels attacked the minor seminary of Buta, diocese of Bururi. Faced with the refusal of the seminarians to separate according to ethnicity, the bandits opened fire, killing 40 young people, who belonged to the dioceses of Bururi, Bujumbura, Ruyigi and Gitega. The rebels fled after having sacked the Seminary and the Pastoral Center (see Fides ,2 May 1997). On the spot where they are buried, the Sanctuary of the fraternity was born, known internationally.
Father Ottorino Maule and father Aldo Marchiol together with lay volunteer Catina Gubert, were killed in the parish of Buyengero at about 7 pm on Saturday 30 September 1995. The nuns who lived not far from the parish heard shots from the mission area, but did not give too much importance. On Sunday morning, since they had not seen the fathers for mass, they decided to go to the mission where they found the three bodies in the living room. It was a real execution: the missionaries had been killed with a blow to the head. Only Catina had been killed with a blow to the chest. Nothing in the house had been touched or stolen.
Father Ottorino Maule (53) was born in Gambellara (Vicenza) on 7/4/1942, and was ordained a priest on 10/15/1967.
On 3 September 1970 he left for Burundi. Went back to Italy in 1979, he was then a teacher and superior of the Xaverian Seminary of Zelarino (Venice) and, from 1984 to 1990, regional Superior of the Xaverians of Italy. After a brief period spent in Paris, to prepare again for the mission, he left for Burundi in September 1991. Since then he was parish priest in the parish of Buyengero, where he was killed.
Father Aldo Marchiol (65) was born in Udine on 19/3/1930. Ordained a priest on 9/11/1958, after a long period dedicated to the formation of young missionaries in Italy, he left for Burundi on 15 September 1978. He remained in that land until the end, except for a short period (1987/88) spent in Italy. He had been in the parish of Buyengero for about a year.
Catina Gubert (74) was born in Fiera di Primiero (Trento) and was in Burundi as a lay volunteer. She had been in Burundi in the years 76/79, until the first expulsions of the missionaries. She then moved to Tanzania to continue her work of assistance and promotion. She had always remained linked to the Xaverian missionaries in Burundi. She provided her service for the promotion of women in the mission of Buyengero, where she was murdered, (see Fides, 7 October 1995). (SL) (Agenzia Fides, 24/7/2019)