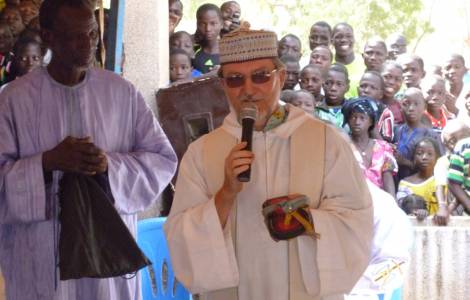 Bomoanga (Agenzia Fides) - "Hello Father Gigi, we have been praying for your release and that of other hostages whose names we do not know for ten months". This is the beginning of the letter that Father Vito Girotto, of the Society for African Missions, wrote to his confrere Fr. Luigi Maccalli, kidnapped from the Bomoanga mission on 17 September 2018.
"I think you, dear Gigi, can talk to these friends of yours - enemies because you know some languages of the beloved Africa and you can perhaps make them reason by simply waiting for the right moment. Some of your kidnappers will remember the reason for your kidnapping and will tell you the reason for that gesture that changed your life and even their lives. They will tell you that you were a point of reference in Bomoanga, you continued to take care of so many sick children because they were malnourished and with the help of 'friends' you could offer them classrooms with a safe roof, where you could read and write sitting on real benches".
"Biased man? You Gigi? It is not true"- continues Fr. Girotto addressing the missionary friend. "You were not only on the side of the Gurmancé but with everyone, even with Peulh friends who knocked like many at the open door of your home at any time. You gave everyone what you could with such generosity and availability towards the poorest in Bomoanga and the villages you visited regularly at least once a month. Every trip to Niamey with the nine-seat Toyota, always regularly all occupied by mothers and children that you accompanied for a visit to the hospital in the capital. You hoped that at least they could be well taken care of. That journey was an adventure, to be able to make appointments with the doctors, and find people who stayed with your sick members of family. Among them there were Christians and Muslims, Gurmancè and Peulh, Haussa and Zerma, and you were for them the father who thinks of everyone and seeks a solution for everyone".
"True missionary creator of communities open to the Word of God, which gives hope of life to all. I believe you are thinking of those communities which continue to pray with the help of many animators of the liturgy and catechists. They also remember you every day, in the morning and in the evening, with the prayers that you yourself had prepared in a well-made booklet in the Gurman language. They are waiting for your release, for the celebration of the Mass which has always been for you an opportunity for reflection. Jesus now speaks to them with your silence and quenches them with the word and the testimony of your life".
"We know, dear Gigi, that you are celebrating a long Mass, that you are not tired of offering with your love to Him who has called you to the priesthood, and who invites you and be firm in the trial, with a cross that seems too heavy. You are stuck in the body, but not in the spirit, and certainly this situation of physical powerlessness has upset your mission projects. But don't think that your life as a hostage has no value: you know well that for Jesus the experience of being weak on the cross giving all his life, was the most effective activity for his mission as Savior. Thinking about all these long months of your kidnapping, we imagine ourselves living in a senseless agony. But it is not true, because your testimony unites so many people who did not even know where to find that great country that you love, Niger, on the map and who now pray and hope for your liberation".
"With you we have discovered that there are so many anonymous hostages in Africa: men, women and children, kidnapped and enslaved that perhaps will never return to freedom", continues Fr. Vito. "Others, and they are many, are held hostage because of poverty, or political choices contrary to their ideas, people trying to escape to live in freedom. I too, like you, left my beloved Makalondi mission that night of September 17, 2018, and with great suffering I was forced to take refuge in Niamey, held hostage by the insecurity and fear of attacks from which no one could defend me. The mission is changing, but who is the protagonist? It is always and only the One who sent us.
Dear Gigi, Untaani (God unites), we remain united in that faith. "God is great!", as many here in Niger say, and to him we entrust you and the people of Bomoanga, of Makalondi and of the whole Sahel.
(VG/AP) (Agenzia Fides, 10/7/2019)