ASIA/PAKISTAN - The Bishops meet the Prime Minister: concerns for religious minorities and the contribution to environmental protection 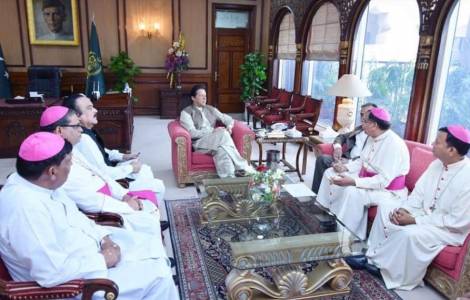 Islamabad (Agenzia Fides) - "Our meeting with Prime Minister Imran Khan lasted about 30 minutes, during which we spoke about the issues and concerns of Christians in Pakistan. In addition, on behalf of the Bishops’ Conference and the seven Catholic dioceses (Karachi, Hyderabad, Multan, Faisalabad, Lahore, Islamabad-Rawalpindi and Quetta) offered a contribution for the construction of the main water reservoirs in Pakistan". This was reported to Agenzia Fides by Bishop Benny Mario Travas, at the head of the Diocese of Multan, and Secretary General of the Bishops' Conference of Pakistan, after the Catholic Bishops met with Prime Minister Imran Khan in his office in Islamabad. The meeting, which began yesterday 4 July, was facilitated by a Christian Member of the National Assembly, Jamshed Thomas. Archbishop Sebastian Francis Shaw of Lahore and Fr. Indrias Rehmat, elected Bishop of Faisalabad were also present.
As Agenzia Fides learns, Imran Khan welcomed the delegation and appreciated the good works of the Church in the development of Pakistan. The Prime Minister, responding to the questions raised by the Catholic Bishops, reiterated the government's commitment to make every effort possible to face the challenges that minority communities live.
Archbishop Joseph Arshad, President of the Bishops' Conference handed the Prime Minister a check for 5,650,000 Pakistani rupees (about 32,470 euros) as funds to be used for the Diamer-Bhasha and Mahmand dams. The Bishops decided in November 2018 to raise funds to support the initiative launched by the then president of the Supreme Court of Pakistan, Mian Saqib Nisar. He had set up this specific fund for the two dams of Diamer-Basha and Mahmand. The initiative was supported by Imran Khan who, after becoming the Prime Minister of Pakistan, continued with the commitment to build these large water reservoirs in Pakistan.
Bishop Samson Shukardin OFM, at the head of the community of the diocese of Hyderabad, told Agenzia Fides: "As bishops of all the dioceses of Pakistan we have written letters to the faithful asking them to raise funds to help the government of Pakistan in this initiative of water reservoir construction. We have offered what comes from the generosity of the faithful". Mgr. Shukardin adds: "Every year we see the effects of climate change and strong heat increase during the summer. We suffer from water shortages and other related crises. We Bishops felt the need to support this cause and we took the initiative to encourage our priests and faithful to contribute generously".
The Bishop explains: "The Church is already at the service of the Country which provides quality education and health care through colleges, schools, hospitals, social works. In recent years we also contribute to the protection of environment, to combat global warming, to raise awareness among our people of using water responsibly and saving it".
"Each diocese - he concludes - works to protect the environment, in collaboration with government offices in their respective territories. Throughout Pakistan we have helped plant over 10 million trees through Caritas Pakistan, the social arm of the Catholic Church in Pakistan". Also in this sector, the Catholic Church in Pakistan stands alongside the government and institutions in order to build the common good of the nation. (AG-PA) (Agenzia Fides, 5/7/2019)