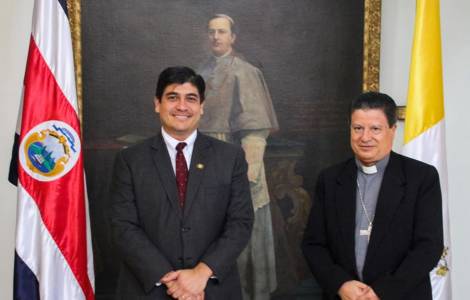 San José (Agenzia Fides) - The President of the Republic of Costa Rica, Carlos Alvarado, met yesterday, July 3, the Archbishop of San José, Mgr. José Rafel Quirós, for more than two hours, with the aim of establishing dialogue on the various themes of national social reality. The note from the Archdiocese of San José, sent to Agenzia Fides, states that the Archbishop was accompanied by Mgr. Daniel Blanco, Auxiliary Bishop, and by priests Edwin Aguiluz and Luis Alejandro Rojas. The Minister of the Presidency, Rodolfo Piza, the Minister of Communication, Nancy Marín, and the Vice-Minister of the Presidency, Juan Alfaro were with President Alvarado. The President delivered a letter to Mgr. Quirós in response to the proposals of the Multisectoral Social Meeting (ESM) and expressed his conviction that "the Catholic Church is an important advisor in these dialogues".
The Bishops’ Conference of Costa Rica (Cecor) had published a statement, with the date of June 28, entitled "Blessed are those working for peace", in which in the face of violence and the general discontent recorded in recent weeks in the country, invited to seek "constructive dialogue" remembering that it is always necessary "to put the person at the center of all political activities and legislative projects".
"The different sectors have every right to demonstrate and be heard", said the Bishops, who became spokesmen for the Costa Rican population, who calls for greater social justice, job opportunities, respect for ethical and moral values, a more equitable distribution of wealth ... "It is time to begin a process of concrete and constructive social dialogue - the Bishops asked -, always seeking the common good, without placing personal, group or power interests before them". "In this way, every temptation to violence, which never leads to anything positive, will be set aside. Social peace is fundamental and requires the will of all in order for it to be built".
The President of Costa Rica has therefore announced the opening of dialogue tables with the various sectors to meet their needs and identify common solutions. "The government has an absolute willingness to dialogue, we will not allow families and domestic production to continue to be affected", the President said in a message to the Costa Ricans on the situation in the country. He also informed that these dialogue tables would be attended by delegate observers of the Defensoría de los Habitantes, and by representatives of the Catholic Church and other protagonists as guarantors. (SL) (Agenzia Fides, 4/7/2019)

AFRICA/IVORY COAST - 125 years of evangelization in the country: "A path of reconciliation, peace and fraternity" acknowledges a representative of the Head of State