AMERICA/COLOMBIA - Bishops in assembly: "to put economy at the service of all and not just a few" 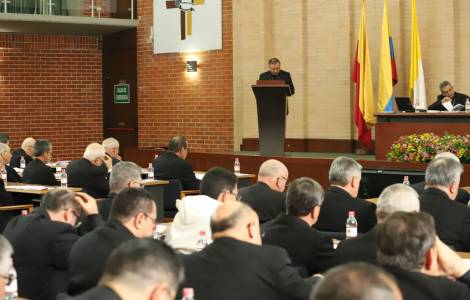 Bogotà (Agenzia Fides) - "Economy at the service of human dignity and the common good" is the theme of reflection of the Plenary Assembly of the Colombian Bishops' Conference (CEC) which opened yesterday, 1 July. During the meeting the 85 Bishops will deepen the current tendencies of the Colombian socio-economic reality in the light of the Gospel and of the Social Doctrine of the Church, to propose lines of pastoral action that promote integral and solidarity development. As part of the centenary of the coronation of the Virgin of the Rosary of Chiquinquirá, the Bishops will conclude the Assembly by going on pilgrimage, Saturday 6 July, to the Basilica of the "Marian city", where they will celebrate the Eucharist, praying for peace and reconciliation in the Country.
The President of the CEC, Mgr. Óscar Urbina Ortega, Archbishop of Villavicencio, opening the conference, recalled that "the dignity of the person, created in the image of God, is a mystery. But it is also a conquest that is the basis of the construction of every society that places people at the center of social transformations". He then stated that social and economic issues should be addressed, in reflection and in the proclamation of the Church, to reawaken the consciences of their leaders, to recover the sense of humanity and justice.
"Human rights are not mere social concessions - the President said -, but basic elements of human dignity, and political power and society are called to protect them." Then referring to the issue of the common good, he noted the need for an 'ethics responsible for the management of the economy, "which must pass through responsibility in the consumption, care of the common home and the protection of the most vulnerable". Another important social aspect is given by the possession of the land, concentrated in the hands of a few, for this reason Mgr. Ortega warned that the measures that accompany the agrarian reform cannot be reduced only to the distribution of the land, but should contribute to the integral development of the peoples.
"Human development and social well-being - he reiterated - need love in truth, in a society that is going through difficult times: financial crisis, its social, psychological, political and anthropological consequences; globalization with the reduction of the level of social protection, cultural eclecticism, the ambiguity of science with questionable consequences in the domain of life and the lack of reflection on the purpose of economy".
The President of CEC recalled that, faced with this complex reality, during the Assembly the Bishops will have to listen, discern and outline lines of action for the evangelizing mission of the Church that accompanies the life of the communities. "We know that there are no magic formulas - he concluded - because history is built step by step, over time rather than in space, but we can help put economy at the service of all our people and not just a few, to fight against exclusion, corruption and inequality, where money dominates at the expense of people". (SL) (Agenzia Fides, 2/7/2019)