AFRICA/BURKINA FASO - A Jesuit: "The country is fertile ground for jihadist groups" 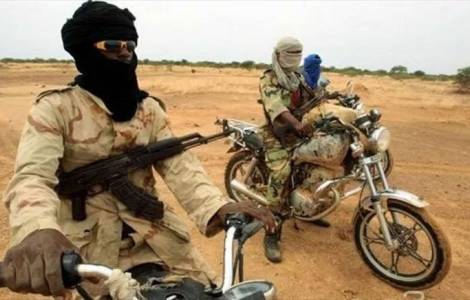 2020-09-08
The National Director of the PMS: "The recognition of the legal personality of the Church is a step forward for a fruitful collaboration"

Ouagadougou (Agenzia Fides) - Burkina Faso was considered an open and tolerant country, where different faiths and ethnic groups coexisted peacefully; today it has become fertile ground for jihadist groups able to carry out increasingly complex military actions and to manage illicit traffics, explains to Agenzia Fides the Jesuit Mathieu Bere, who has conducted some research on Islamic fundamentalism in Burkina Faso.
The main terrorist groups operating in Burkina Faso - explains Father Bere - are Islam Ansarul, Jama'at Nusrat al Islam wal-Muslimin and Islamic State in the Greater Sahara. Islam Ansarul is mainly active in the province of Soum and in the neighboring provinces of the North. The Islamic State in the Greater Sahara (branch of ISIS in the Sahara-Sahel) operates mostly in the border areas between Niger and Burkina Faso, while the groups that are now part of the Jama'at Nusrat al Islam wal-Muslimin (Ansar Dine, Macina Liberation Front, Al-Mourabitoun) are based in northern Mali from where they plan attacks in Burkina.
Some of these groups have sworn allegiance to Al Qaeda, such as those who make up the Jnim coalition under the leadership of Iyad Ag Ghaly. Among these is Malam Dicko, the founder of Ansarul Islam, a disciple of Hamadoun Koufa, a radical preacher. Others, such as the Islamic State in the Greater Sahara, have joined the Islamic State.
"The relationships between these groups are complex and not always stable", notes the Jesuit. "But everyone has explicitly claimed responsibility for attacks in Burkina Faso and some of the attacks, whose authors have not been clearly identified, have been attributed to them".
For example, Ansarul Islam has claimed attacks against schools and teachers in the province of Soum and justified them by claiming that in those schools they continue to teach French instead of teaching the Koran and Islam. "Behind this statement - underlines the Jesuit - there is the conviction that modern western education corrupts the young and if you do not know the Koran and you do not have an Islamic education, your soul will not be saved". Ansarul Islam (which means Defense of Islam) therefore shares the same basic idea as Boko Haram, the terrorist group that operates in Nigeria, Niger, Chad and northern Cameroon and whose name in Hausa literally means "the book" (boko ) is "illicit" (haram).
The Sahel is the most affected region (in particular the province of Soum and that of Oudalan which, together, have undergone 60% of the attacks). Attacks have also occurred in the region that borders Niger, in the northern and central-northern regions and in the south-western region (near the border between Mali and Burkina). "However - observes Father Bere - Ouagadougou, the capital, has also been targeted by terrorist groups for complex coordinated attacks: for example the attacks against Cappuccino cafeteria and the Splendid Hotel in 2016 and the double attacks against the headquarters of the armed forces and the French embassy in 2018".
However, religious motivations are not the only ones that drive these groups into action. "Some research has shown that terrorist groups in the Sahara-Sahel region are involved in illicit economic activities: drug trafficking, arms trafficking, kidnapping for ransom and smuggling of goods". (EC) (Agenzia Fides, 28/6/2019)