AMERICA/COLOMBIA - The Bishop of Buenaventura: violence has reached terrifying levels, people are afraid to denounce 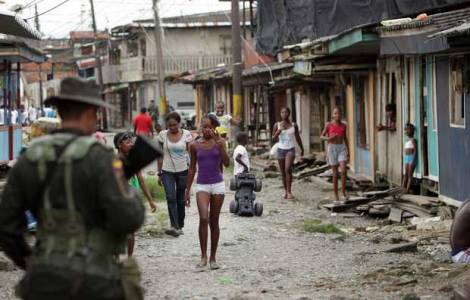 2019-11-27
Bishops: "For the good of our country: dialogue, reconciliation and integral development"

2019-11-21
Today national strike; violence in Cauca and Chocò does not stop

Buenaventura (Agenzia Fides) - For almost two years he has been the Bishop of the Diocese of Buenaventura in Colombia, and he has already had to deal with violent groups that have sown terror in the area.
Archbishop Rubén Darío Jaramillo Montoya continues to try all possible ways to stop the violent confrontation of criminal groups that compete for control in this part of the country, where the most important Colombian port on the Pacific is located, a crossroads for trade that sustains much of the national economy.
Only a few days ago the Bishop told a local radio station that he was willing to board a helicopter to spread holy water on the port and the city in order to permanently remove the demons. In an interview with the press, he asked for the intervention of national authorities to tackle together the violence that is reaching terrifying levels.
In the interview sent to Fides, the Bishop said that it is not surprising to find bodies in the street, as a symbol of the power of violence in the port area. The "casas de pique" (places prepared to torture and dismember the victims) continue to exist: a reality that in 2015 was thought to have disappeared, but had been denounced by Mgr. Héctor Epalza Quintero, PSS. On many occasions Priests denounced this horror, signaling how the violence has been "anchored" in the port for more than 35 years. While other regions have seen a decrease in violence with murder, Buenaventura remains at alarming levels (see Fides 10/06/2015 ).
"We have had 54 violent deaths so far this year, but there are many people who disappear. And this is not reported - said Archbishop Jaramillo two days ago -. The problem is that there is not yet a culture of filing charges because there is fear, we have a society that is afraid of denouncing. The community asked me to anticipate Sunday masses at six in the afternoon because they fear being abducted. There are men with rifles that run through the neighborhoods".
"I have heard terrible stories from the faithful - the Bishop continues -. These groups force a family to leave, so the house remains empty and criminals take advantage of keeping their weapons there, and to bring people who do not pay extortions. "Even people living nearby are threatened and have to go to another neighborhood, because people are poor and cannot go to another city. This intra-urban movement is not registered as an internal displacement or migration. The State is not aware of this Internal displacement and therefore people end up satisfying a law called silence: it is better to be silent".
Faced with this situation, Bishop Jaramillo proposes to get to the root of the problem: "first of all we have moved away from God, instead we must see the other as something sacred, life is sacred. Today we are no longer interested in anything, but only economic power, commercial power, political power and the power of arms, which in essence is he who commands. We must ask for the help of the State, even social organizations, private companies, with strategies to create trust and thus promote work and security", concludes the Bishop .
The Diocese of Buenaventura (1996), has an area of 6,297 square kilometers and a population of 407,675 inhabitants, of whom 306,000 are Catholics. There are 38 priests (23 diocesan and 15 religious), 15 religious brothers, 12 religious women. There are 6 major seminarians. (data to 2017). (CE) (Agenzia Fides, 17/6/2019)

NEWS ANALYSIS/OMNIS TERRA - Deep social and economic crisis in Haiti: how to get out of the serious situation?

ASIA/PHILIPPINES - The Church in the Philippines: "No" to reinstating the death penalty