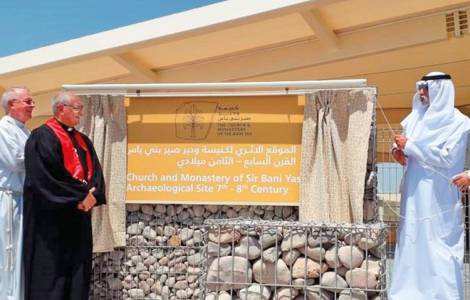 Abu Dhabi (Agenzia Fides) - The oldest Christian archaeological site of the island of Sir Bani Yas, 200 km west of the city of Abu Dhabi, was opened on Thursday, June 13 following extensive improvements to the site that will make it possible to visit large areas of the remains of the monastic complex so far closed to the public. The official reopening of the site took place in the presence of Sheikh Nahyan bin Mubarak, Minister of Tolerance of the United Arab Emirates: "The church and monastery, said the Minister in his speech, shed light on our cultural history, one that we can be proud of".
The archaeological site includes the vestiges of a Nestorian monastic complex dating back to the 7th century AD, where a small community of about 30 monks lived. "its existence", emphasized Sheikh Nayan bin Mubarak "is proof of the long-standing values of tolerance and acceptance in our lands". In Abu Dhabi, last February 4, Pope Francis and Sheikh Ahmad al Tayyeb, Grand Imam of al Azhar, signed the Document on human brotherhood for world peace and common coexistence.
The 7th Century monastery is located on the eastern side of the island and is believed to have been established by small community of about 30 monks. While it was open informally for many years, the site has now been made more accessible for visitors.
Parts have never been seen by the public before including an ancient dormitory that draws the curtain back on the day to day lives of monks who lived and prayed here more than a thousand years ago.
"This is a community", wrote historian Don Lorenzo Cappelletti, a professor at the Pontifical Antonianum University "who were called Nestorian because at the time of the Council of Ephesus (431), which condemned Constantinopolitan patriarch Nestorius, they remained faithful to the antiochene theological tradition, against the extremism of the Alexandrian theological current".
In reality, "already before the Council of Ephesus, they intended to distance themselves from the Roman State Church. Since the beginning of the third century, in fact, these Christians had their own patriarch (katholikos) based in Seleucia-Ctesiphon on the Tigris, whose autonomy stemmed from the need to show the independence of these Christians from the Roman Empire, which constituted for centuries the enemy par excellence of the Persian world. More than moving away at a dogmatic level, in other words, their autonomy tended to avoid misunderstanding and persecution".
According to researchers and archaeologists who studied the site of Sir Bani Yas, the monastic complex was active for at least 150 years, continuing to represent a stopping point for traders and travelers for many decades even after the advent of Islam. "At the beginning there must have been a remarkable mutual tolerance", emphasized Bishop Paul Hinder, Apostolic Vicar of southern Arabia, present at the inauguration.
The archaeological site was discovered in 1992. Some years later, the discovery of some crosses confirmed that it was the remains of an ecclesiastical complex, including a church, refectory, the dormitory and a cemetery. The monks cooked the bread and the fish caught by them on the spot, since the monastic complex rose not far from the sea. (GV) (Agenzia Fides, 14/6/2019)